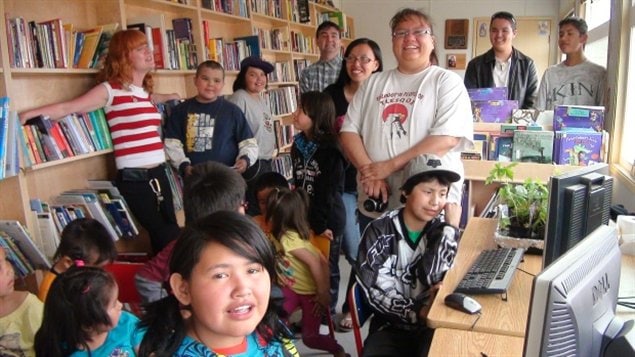 The library at Toosey First Nation was opened in 2011 with 3,000 donated books.
Photo Credit: Michael McCarthy

A judge and a former police officer promoting literacy among indigenous people have inspired the creation of six new libraries on remote reserves in the western province of British Columbia. Of the more than 600 First Nations in Canada, fewer than 200 have a library.

Reading is considered to be crucial in the education of all children in Canada. Steven Point realized that and decided to boost the chances of aboriginal children by bringing boxes of donated books when he visited reserves. In 2007, he was the province’s lieutenant-governor, a largely ceremonial role, but one he took seriously.

He spoke with Bob Blacker, a former police officer and his aide-de-camp and they got the ball rolling by recruiting retired librarians to solicit book donations. They were soon swamped with new and used books and set up headquarters in a donated storage locker.

Trailer manufacturer Britco offered a free trailer to house a library in 2011 and Blacker arranged to have it transported hundreds of kilometres to the Toosey First Nation.

That led to the donation of more trailers, more books and donated labour from hundreds of members of the volunteer group, the Rotary Club.

Thirty-thousand books have been donated so far and six more libraries will be set up on other reserves in British Columbia.