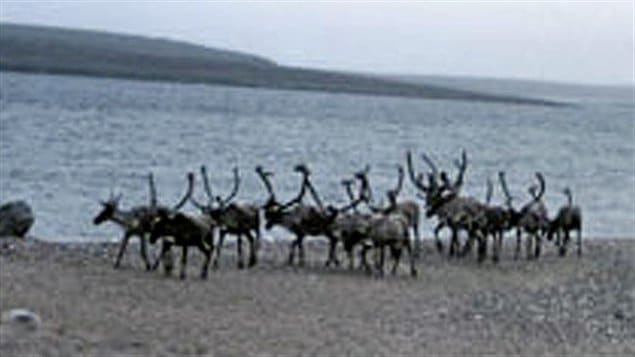 Barren-ground caribou have adapted to the harsh environment of the northern tundra. Both male and female caribou grow antlers, but the males are much bigger. All caribou are sensitive to development activity and their numbers are declining
Photo Credit: Canadian Wildlife Service

Board urges protection of caribou lands

In the northern Canadian territory of Nunavut, the Nunavut Planning Commission (NPC) has been advised again to place restrictions on development plans in caribou ranges.

Map showing range of the Beverly and Qamanirjuaq caribou herds and their summer calving areas. The BQCMB says rapid development will be devastating to the herds and to subsistence hunters. (BQCMB) CLICK to enlarge

The animals are very sensitive to development activities and numbers of several herds have been dropping dramatically in areas throughout Canada.

The Beverly and Qamanirjuaq Caribou Management Board (BQCMB) is concerned with preserving the two herds of arctic caribou whose migration range includes two territories, two provinces, and four differing native cultures who traditionally depend on caribou for food, clothing, and additional income.

The Board told the planning commission that permits for exploration and development on the herd’s summer grounds will be devastating to the herds and to subsistence hunters.

The board says total protection for calving and post-calving grounds is needed along with a reduction in the pace of development throughout the range.

Earl Evans is a traditional harvester from Fort Smith and chair of BQCMB.  He’s quoted in the Northern Journal saying, “If you look at all the permits in possible places the mines can go, the whole Nunavut countryside is completely covered with interests, and they’re all in different stages of development: some are exploratory, some there’s work going on to different degrees”.

He said, “There’s no stopping development; it’s going ahead. But what we want them to do is scale down the development. It doesn’t have to be so big, such a big glut of development all at once.”

He says the development has been pushing herds west and south, and while development is a serious problem for the herds, ease of access via the many new mining roads also means excess hunting.

Evans said some of the communities are now looking at a total allowable harvest because the drop in caribou numbers is becoming frightening.

He notes that the idea of setting limits for traditional hunters on the number of caribou harvested may anger some who say it’s their right to take the caribou they want.  However, Evans says limits will likely be needed as the herds are being hit with a combination of stressors including habitat loss from development, migration disturbance from noise, roads, and other acitivity, and climate change.

The NPC is expected to release its draught land use plan in late June, and then  allow public comment with a hearing planned for November.