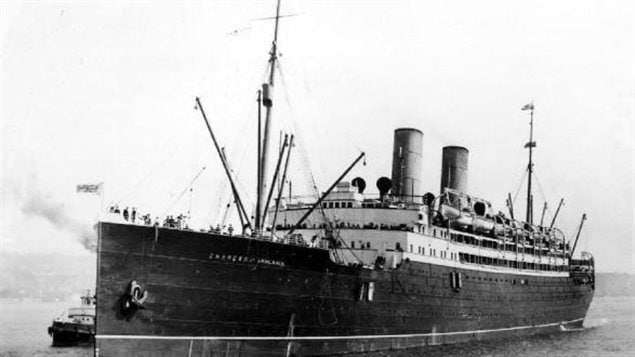 1908 photo of the Canadian Pacific Steamship Line, Empress of Ireland. 170m long, 20m beam. Left Quebec City for Liverpool 28 May 1914, rammed and sank at 2am on the 29th near Rimouski Quebec, One of the worst maritime disasters in history.
Photo Credit: Alexander J. Ross-Library Archives Canada PA-134921

The tragic and almost unbelievable disaster of the Titanic only two years earlier was still fresh in people’s minds  as the liner Empress of Ireland left Quebec City on May 28, 1914.

image of the RMS Empress of Ireland sitting some 45 metres deep in the fast moving St Lawrence currents. many artefacts have been recovered by divers both legally and illegally. (photo-SRC archives) CLICK TO ENLARGE

Nevertheless, no-one was really worried. The huge ocean liner was considered the Canadian Pacific Steamship Line’s fastest and most luxurious ship, which had made so many problem free Atlantic crossings since her launch in 1906.

Loaded with some 1,477 passengers and crew, the Empress was en route for her 96th crossing as she made her way down the St Lawrence.

At Rimouski Quebec, the ship made a stop to disembark the St Lawrence pilot and pick up mail.  In the early hours of the 29th as the ship got underway back into the St Lawrence, fog began rolling in.as the ship approached Father Point.

Another ship coming upriver and heading towards Rimouski to pick up a pilot, was sighted a few kilometres distant before the fog closed in completely. The ships, each knowing the other was in the area, continued to sound their whistles to warn the other.

It was a futile effort, and each captain would later blame the other for making a wrong turn.

Shortly after the initial sighting, moments before 2 AM on the 29th, with most passengers and crew asleep,  the bow of the Norwegian collier Storstad loomed out of the fog just metres from the Empress.

The fully laden collier Storstad was riding low ine water. Designed to cut through Norwegian ice, its bow was sharp and reinforced, slicing easily into the side of the Empress and several metres below the water line. At the same time it sustained repairable damage to its bow, and mostly above its own water line where it was less rein-forced. (photo-W5-archives) CLICK TO ENLARGE

It was too late to react and the ice-strengthened bow of the low riding collier knifed into the liner’s side.

The momentum of the ships and the current pulled the stern of the Storstad around, twisting the bow into the Empress and then free, leaving a huge gash in the liner which allowed a huge torrent of water to rush in.

Against maritime rules, the portholes in third class near the water line were opened as passengers wanted the fresh air in the stuffy cabins. It was later determined that watertight doors has also been left open.

As the ship began to list quickly,  more water rushed in, drowning most of the third class passengers below decks.

The new $2.50 stamp issued by Canada Post for international letters, showing the Storstad’s bow emerging from the fog CLICK to ENLARGE

The danger of the ship was immediately obvious and the crew began to lower lifeboats, but the ship lurched onto its side within minutes allowing only a handful of lifeboats to be launched. Many passengers in the upper decks awakened by the shock and noise had made it to the boat dec, and then as the ship lay on its starboard side, as many as 700 managed to crawl onto the still exposed port side.

However, the ship stern suddenly rose slightly, and the Empress slipped beneath the surface and into about 45 metres of water, throwing the passengers into the icy currents of the St Lawrence.

Unlike the Titantic, the Empress of Ireland  sank in a mere 14 minutes.

Although other ships, including the Storstad, were soon on the scene, the swiftness of the sinking and the cold water proved deadly

In the end, some 1,012 of those on board lost their lives, with 465 saved, thus becoming the worst maritime disaster in Canadian history.

The incredible tragedy, one of the worst in all maritime history was soon pushed from the news and public eye by the looming war in Europe and subsequent horrors of the First World War.

This centennial however, will be marked by memorial services in several locations across the country.

The tragedy is also being commemorated  with the release of Canada Post stamps, a pair of silver coins from the Royal Canadian Mint, the launch of a Museum of Canadian History exhibit, the unveiling of a monument at the Father Point Maritime Museum, and several memorials around the country.