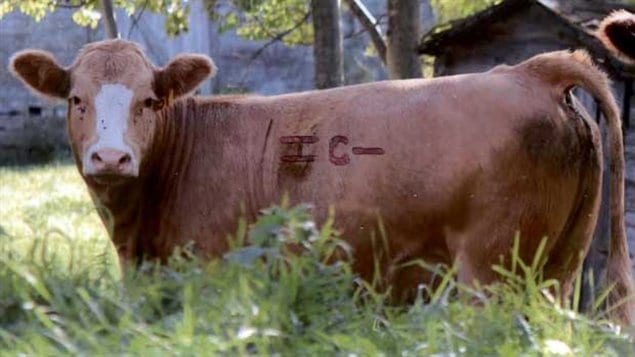 Alberta farmer Alan Hobbs is missing 59 heifers valued at about $80,000. Though his brand is clearly visible, the province of Manitoba has no brand recognition programme and so is a popular place for theives to sell larger numbers of stolen animals.
Photo Credit: RCMP

Most people in urban centres of Canada would undoubtedly think “cattle rustling” is something out of Hollywood westerns of the past.  Alberta rancher Alan Hobbs knows differntly. Thieves have just cost him tens of thousands of dollars.

With the high cost of beef in recent years, rustling has become a plague for cattle farmers, especially in the western prairie province of this country where a cattle herd might roam over vast areas of land far from the farmer’s eyes for days even weeks at a time..

Over the past few years, reports indicate approximately 6,000 cattle are stolen in the western provinces annually.

With prices now ranging at anywhere from $180 to $225 per hundredweight (Cwt) cattle can go for well over $1000 per animal, making it attractive for the rustlers.

Part of the problem is that one of the prairie provinces, Manitoba, has no brand recognition system in place, so live cattle stolen in one province and driven to Manitoba result in few dangers for the thieves.

While thieves sometimes grab only one or two animals, in other cases dozens of cattle are swiped at once.

The latest theft involved rancher Alan Hobbs near Provost, Alberta who did a head-count this week and found 59 heifers missing.

Royal Canadian Mounted Police value the loss at around $80,000.

They believe it was someone familiar with the farmer’s operation and probably used a large truck to take all the animals at once.

Farmer Alan Hobbs says this kind of thing is difficult to stop, adding “I just think with these high cattle prices now that this is going to be more and more of a…thing that happens”

people in the urban centres of Canada