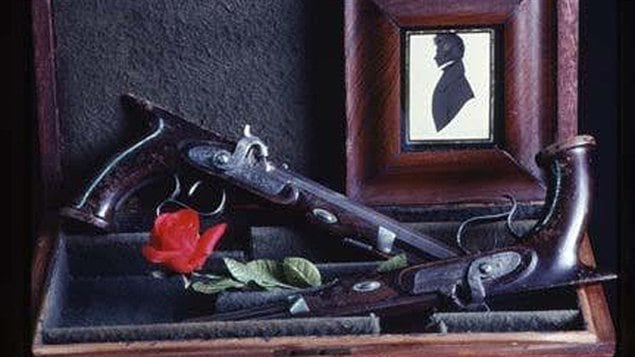 The last duel in Upper Canada

Was it bright and sunny, or a drizzly grey morning on June 13 1833, reports vary.  Nevertheless, five men slipped quietly out of the small town of Perth Ontario, in what is now eastern Ontario.

Two young law students and friends, Robert Lyon, and John Wilson, two others, and a doctor, quietly arrived in a clearing beside the Tay Canal.

As is often the case, they were to settle a dispute over a woman. But one of the men, a Frenchman named Henri Lelievre, had goaded Lyon into demanding a pistol duel over the love of local schoolteacher and possibly disparaging remarks against Miss Elizabeth Hughes.

The rivalry goes a little deeper as the two, and Lelievre, were students under two of the towns three different prominent lawyers, all of whom were bitter rivals and two of whom had already challenged each other to a duel, although it never took place.

The story gets more confusing about whether the question of Miss Hughes involved disparaging remarks, love, and how Lelievre may have been mixed up through being rejected by Hughes and blaming Wilson and possibly pushing Lyon into a public confrontation between himself and Wilson, which led to the challenge.

No matter the background, that fateful morning and both wearing black pants, the two protagonists stripped off their shirts and with pistols armed, walked to separate areas of the field, Standing sideways in typical duelling pose they raised their pistols, and fired simultaneously across the field about 60 feet apart.

When the clouds of smoke cleared, both men were still standing, and somewhat relieved that they had both missed. With the deed done, the doctor and Wilson’s second suggested that they should end the argument there and Lyon appeared ready to apologize for the public incident.

Then, Henri Lelievre, Lyon’s second, is believed to have made a short declaration that honour would in fact not be satisfied until their was a clear resolution and called for the pistols be reloaded.

Returning to their marks, the pistols were raised and the simultaneous shots echoed in the clearing.

This time though, Lyon still only 19 years of age, spun around and the pistol flew from his hands, from a shot under his armpit which pierced the heart, killing him before he hit the ground .

The Frenchman, Lelievre, immediately ran away and even fled the country, fearful over blame for his part in the death.  The doctor and Wilson’s second reported themselves to police, and Wilson was locked up for three months before his trial in the larger city of Brockville.

He argued for himself and was acquitted. As for Miss Hughes, she later became Mrs Wilson and the couple had three children while Wilson went on to become a judge and a member of Parliament

A short book on the incident, A Matter of Honour, has been written and later a film was made with the same name.  Canadian country singer, Stompin Tom Connors, recorded a song called “The Last Fatal Duel”.

As for the clearing outside of Perth, it is now a park and campground known as Last Duel Park.

This was however not the last fatal duel in what is now Canada.

That took place in Lower Canada (now Quebec) five years later, again over a woman, the wife of a prominent lawyer. The British officer Major Henry Warde faced lawyer Robert Sweeney, in Verdun on May 22, 1838. Warde was fatally wounded in the incident which had attracted a large crowd.

An inquest was held into Warde’s death. No civilian witnesses were called in spite of the crowd present, and it was determined that Warde died while participating in a duel with an unknown person. Lawyer Sweeny sat through most of the inquest and walked away a free man at the end of it.

One more duel was fought in what is now Canada. It took place in Newfoundland in 1873, but with a rather happier outcome. Again fought over a woman, the two suitors, Dooley and Healey, faced each other and fired. Dooley fell to the ground, which shocked Healey who reported cried out, “My God, what have I done”. The seconds revived Dooley who had merely fainted and then told the protaganists they had loaded the pistols with blanks.. They then apparently all went out together for drinks.