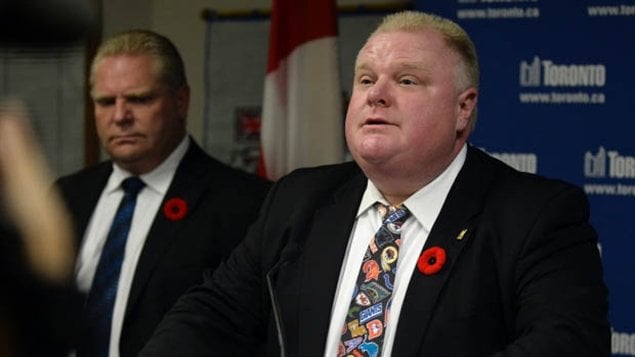 Toronto Mayor Rob Ford, right, speaks to the media at Toronto City Hall in November 2013 Ford admitted that he has smoked crack cocaine, probably 'in one of my drunken stupors,' but insisted he's not an addict. Brother, and city councillor, Doug Ford always a defender of Rob, stands in the background
Photo Credit: Aaron Harris/Reuters

You may be hard-pressed to think of a stage play, or especially a musical about a city mayor..Ok there was Fiorella about the former New York City mayor, but such theatrical subjects are few and far between.

But wait, the current embattled mayor of Canada’s biggest city, Rob Ford, is going to be the subject of a musical this fall.

Playwright Brett McCaig is holding an open casting call today to look for that perfect someone to take the lead role of the larger-than-life city mayor, presently away from his duties in a re-hab centre.

He told a CBC reporter the Ford character is a lot like Falstaff from Shakespeare.

“He’s very Shakespearean or operatic. He’s our modern tragic hero — he rode in on his white horse, stallion, to save his village and then through his own weaknesses fell hard”, says McCaig.

McCaig, along with two friends, a lyricist and a musician, began thinking of the play “Rob Ford The Musical: The Birth of a Ford Nation” about a year ago while sitting in a pub.

He says many people have been critical of the mayor for bringing shame to the city with his secretly filmed apparently drunken tirades , antics at city hall, and alleged use of crack cocaine.

McCaig disagrees, saying Toronto has never has such huge media exposure, “ its never been more spoken about or thought about in the North American diaspora”

Other characters include brother Doug Ford, a police chief, a prominent lawyer, novelist Margaret Atwood, a newspaper editor and a “spiritual guide” named Transgression (a.k.a. Tranny) who serves as “the voice of reason,”, and the media, which he says has played a big role in the rise and fall of Rob Ford.

He also says he doesn’t want the show to ba a “Rob Ford bashing, because that would be too easy” . He says he wants it to be a humanistic look at someone who rose to power but crashed due to his own weaknesses.

McCaig says he’s never met the mayor but would be happy to have him come to the show which is slated for September in the city. He says he’d love to give the mayor and family free tickets and even have him give an opening speech.