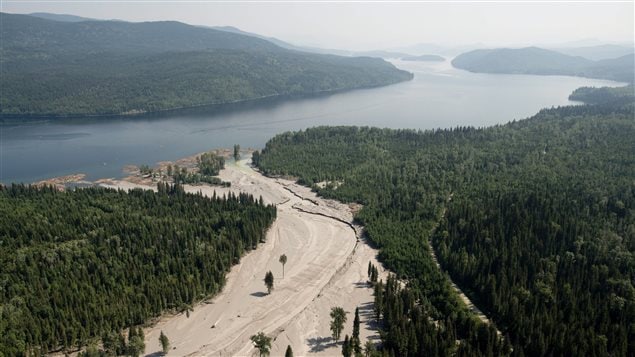 The toxic contents from a mine’s tailings pond flows down a creek into Quesnel Lake and adjoining waterways in the western province of British Columbia.
Photo Credit: Jonathan Hayward/Canadian Press

A mine’s massive holding pond failed Monday sending toxic sludge and debris raging down a hillside into pristine waterways in the province of British Columbia. The government’s environment department told CBC news it had warned Imperial Metals repeatedly about wastewater levels in its pond before the breach occurred.

Use of water banned

The gold and copper mine yields waste including arsenic, lead, other metals and compounds. There is a ban on all consumption and recreational use of the water in the Quesnel and Cariboo river systems from the spill site to the Fraser River, several hundred kilometers away.

The president of the company has apologized to residents of the town of Likely, downstream from the breach.He said an investigation is just beginning and vowed the company will “make it right.”

Millions of cubic metres of toxic water and debris were released first into Polley Lake and Quesnel Lake, then flowed into their adjoining waterways. The minister of energy and mines is calling the contamination “a true disaster.” Bill Bennett added there was no reason for his department to think this kind of breach could occur, but it will investigate.