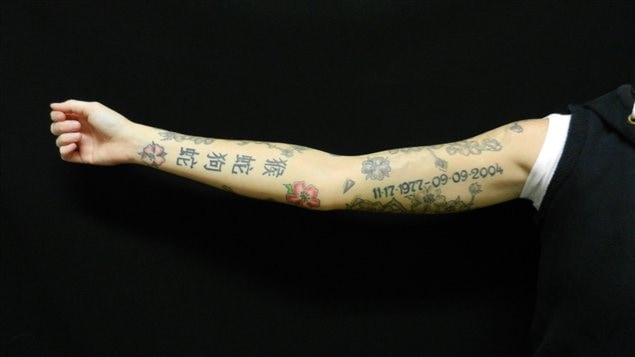 ListenTattoos containing human ashes are the latest trend in parlours in Canada. The practice known as “Morbid Ink” is being requested by customers who want to preserve the memory of deceased family members, friends or even animals using their remains.

“It’s a trend … that’s re-emerging,” says York University sociologist Deborah Davidson. “It furthers the idea of embodying the deceased person or animal … through the tattoo.”

“Morbid Ink” remains still underground. The procedure is considered unsafe by Health Canada, and only a few tattoo artists accept to do them. But memorial tattoos created to remember or honour a person, place, animal, relationship or event are more and more common.

Professor Davidson is working on the world’s first comprehensive digital archive of memorial tattoos. She says these tattoos have a “profound meaning”.

“Most of the photos and narratives I’ve collected are of the deceased… People want their loved ones remembered and spoken about,” says Davidson.

“Much more than a fashion statement”

According to Davidson, death has been “closeted” and “sanitized”. Tattoos are a way of opening the dialogue.

“A friend I know … has a tattoo in memory of her 15 year-old daughter, Daniela, who completed suicide because of bullying. So, it opens dialogue about death, about bullying, about profound issues that trouble us as a society today… [Memorial tattoos are] much more than a fashion statement,” Davidson says.

Morbid Ink tattoos are not part of Professor Davidson’s archive for the moment. But unlike some tattoo artists, she doesn’t consider them “weird”.

“I know that some tattoo artists refuse to do it, and others do it … only for relatives, but not for paying customers. I don’t think it’s weird. I think it’s another way that people try to really embody their loved ones,” she says.

At the moment, Professor Davidson is working with sociologists, librarians, photo essayists and computer scientists on a prototype of the digital archive.She invites people who have memorial tattoos and stories to tell to contact her.