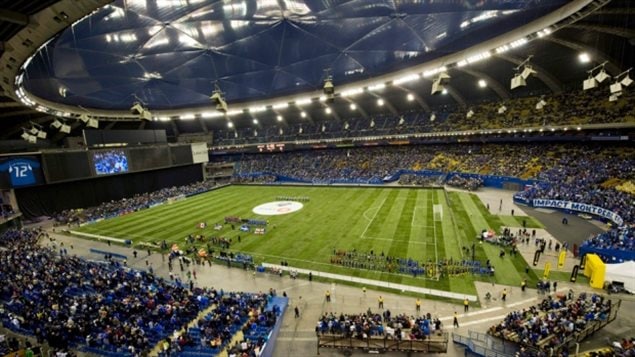 Montreal's Olympic Stadium, where the final of the FIFA U20 Women's World Cup will be played next week.
Photo Credit: CP

Canada’s Women’s Under 20 team, having made it all the way to the quarter-finals, for the first time, met the German team in Edmonton, Alberta, on Saturday, and lost 2 – nil.

“I think anybody in Canada and outside of it can realize that Canada does have a very bright future in the sport,” Canadian coach Andrew Olivieri told CBC reporters following the match. “There are some good players coming through and we had some players who were 16 and 18 years old on the pitch today who performed as well as a good German squad.”

Meanwhile the French team beat South Korea on penalty kicks.  Now they will play Germany in the semi-final Wednesday in Montreal, while Nigeria will play North Korea in Moncton, New Brunswick,

The final will be played Sunday August 24, in Montreal’s Olympic Stadium.