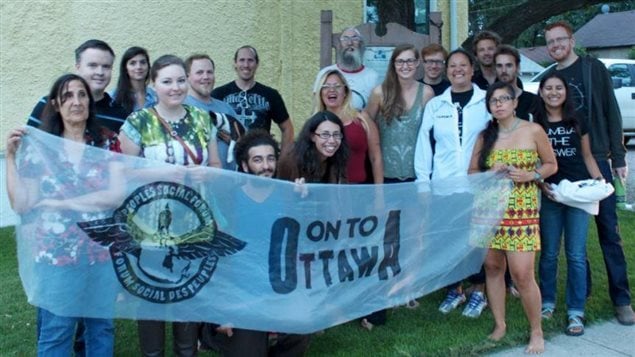 Participants in the caravan making its way from Vancouver to Ottawa for the beginning of the People's Social Forum on Thursday, August 21st, 2014.
Photo Credit: courtesy of Raul Burbano

The People’s Social Forum gets under way this week in Ottawa and across the river, in Gatineau, Quebec.  It is the first national event to bring together groups of First Nations, labour groups, students, Canadian NGO’s and many other interested people.

“Seeing the impact collective action can have”

Raul Burbano, of Common Frontiers, is the program director.  He describes the forum as an event organized by the people, for the people.  He says it has been three years in the making and it follows the World Social Forum movement.

Originally conceived as a counter-summit to the Word Economic Summit in Davos, Switzerland, the idea behind the World Social Fourm was to unite and strategize instead of protesting the Davos summit.

Caravans of buses are now on their way to Ottawa.  Today the contingent from Vancouver is in Winnipeg.  They will be converging in Ottawa for a major march on Thursday.

“Weaving together the struggles”

Raul Burbano says the four-day event is organized under 17 topics, with a festival of cultural activities taking place in tandem.  There is even a Children’s Social Forum, with a view to including the citizen’s of the future.

The original framework for this event was a Quebec-Canada-Indigenous people approach, however, with the evolution of several national issues the gathering has now evolved into one that includes people of colour, who made it known they do not feel part of the former tripartate paradigm.

Food sovereignty, the environment, deregulation and the privatization of services, the criminalization of dissent as well as attacks on organized labour, are among the 17 topics that will be discussed by big names such as author and activist, Naomi Klein, Canadian Labour Congress president, Hassan Yussuf, and Gabriel Nadeau-Dubois, one of the student-leaders of Quebec’s 2012 protests.

There is also growing concern over the restrictive, and what many see as racist immigration policies of the Harper government.

Participants will be looking at alternatives to the current capitalist model, envisioning a post-capitalist society,  Raul Burbano says he first became involved in these social movements in Latin Amerca, and he says he is motivated by having seen “the impact collective action can have.”