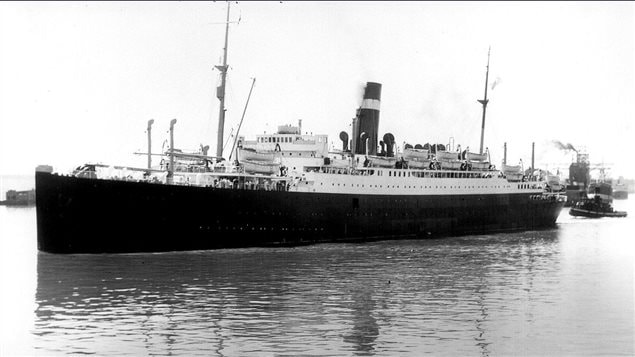 The black clouds of war had been gathering over Europe for months. Germany forces had invaded Poland on September 1, and Britain, supporting Poland, entered into a state of war at 11am BST on September 3. 1939

Britain had previously warned shipping a week earlier to be on a “war footing”.

The unarmed passenger liner SS Athenia destined for Canada had sailed from England on September 2.  Nowhere near the size of ships like the Queen Mary,or Titanic, she nonetheless carried 1,103 passengers, including about 500 Jewish refugees, 469 Canadians, 311 Americans, 72 British, along with 315 crew.

Heeding the Admiralty warning, Athenia’s captain sails close to the Irish coast away from deeper water favourable to U-boats. He keeps the ship’s lights out, and porthole curtains drawn. Passengers are ordered not to smoke on deck so the lights from matches and cigarettes would not be seen.

As Athenia sails away from the Irish coast to deeper waters on September 3, the captain orders a zig-zag course making it difficult for U-boots to get an accurate target. But Athenia is slow, at only 15 knots maximum speed.

On the evening of September 3, the German submarine U-30 was patrolling off the coast of Ireland.

It spotted the SS Athenia at 16;40, and tracked the liner until 19;40 when the commander fired torpedoes, one of which hit the stern, fatally wounding the ship.

U-boat commander Fritz-Julius Lemp claimed because the liner was away from “typical” shipping lanes, zigzagging, and “darkened”, he therefore presumed it was either a troopship, a Q-ship (gunship disguised as a freighter) or an armed merchant ship, any of which made it a fair target.

The U-30 crew learning that they had just hit Athenia, an unarmed civilian ship full of women and children, were horrified that they had just committed a warcrime. Lemp swore his crew to secrecy and ordered them to never speak of the attack. He also altered the ship’s official log to erase any connection with the attack.

Athenia meanwhile took several hours to sink, during which time hundreds of passengers were rescued by other ships rushing to her aid.

First Canadians and Americans to die in WWII were civilians

However, 98 passengers and 19 crew were killed.  Several were killed by the torpedo explosion, but more died during confusion and errors in the rescue.

Fifty-four were Canadian, 28 were American, raising concerns for Germany that the attack might bring the US into the war.

The Allies were furious at the attack on a civilian ship.

Hitler who had earlier ordered his U-boot fleet to adhere to the Hague convention on unarmed civilian ships, quickly ordered the criminal action to be kept secret, fearing another “Lusitania” incident as in WWI.

Germany also quickly blamed the attack on the British as a propaganda effort to draw American into the war.  This did have some effect on a few American officials, although American and other citizens around the world generally blamed Germany.

It was only in 1946 that the truth was finally revealed during the Nuremberg trials of Nazi officers.

As for Lemp, he would later be involved in yet another major setback for Germany. He commanded U-110 which the British attacked and captured in May 1941. Believing his damaged sub was about to be rammed, Lemp ordered the crew to abandon ship. At the last minute the HMS Bulldog veered off and stopped, and sent a crew aboard the slowly sinking sub from which the British retrieved the invaluable marine-version Enigma code-machine and equally valuable code books.

Lemp likely drowned, although Germans say he was shot to avoid swimming back to the sub and scuttling it.

The capture of this critical information was one of the great secrets of the war.