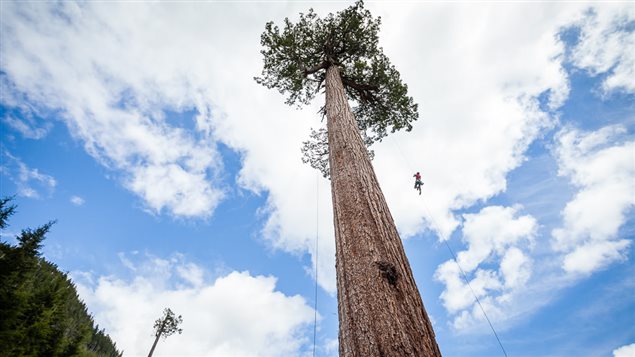 They are often huge. They are always majestic and awe-inspiring. Some have been around for a thousand years or even more.  Now a renewed effort is underway to document these giants.

Sally Aitken is a professor in the Department of Forest and Conservations Sciences at the University of British Columbia where the registry is now based. She is also the Director of the Centre for Forest Conservation Genetics

Canada of course has lots of big trees, really big trees, but the biggest trees in Canada and some of the world’s biggest are found in the west coast province of British Columbia.

It’s believed that it’s due to the generally mild and wet climate. The registry has many huge trees listed at over 40 metres. Even some at 80 and 90 metres.  Big Lonely Doug, a Douglas Fir,  at 66 metres is the second tallest of its species in Canada.

It was taller but when the rest of the forest was clear cut around it,  it was left completely exposed to the elements and a storm has since broken off the main top branch.

Although the original registry started back in the mid 1980’s counted only the biggest trees, the new version seeks big trees of all of the 50 or so species in the province. Thus a champion of one species might only be 20 metres high, while the champion of another species could be three of four times bigger.

The new big tree registry doesn’t only go strictly by height, rather by a formula counting height, circumference and crown size.

Professor Aitken says the big old trees are important contributors to the forest ecosystem, but due to combined plant and animal life in their crowns, each creates its own individual ecosystem.

She says it appears that the mortality rates of old trees are increasing with climate change and that the registry helps us and citizens monitor the health of these giants over time.

Once people know of a registered big tree, they can advise of changes  such as if it blows over, loses its top, or dies. The registry also produces data on the type of ecosystems that these trees are found in, and this information can guide certain research.

The registry seeks to locate these big trees are so we can conserve them, as a biological legacy of the past, as important members of forest ecosystems today, and for future generations.