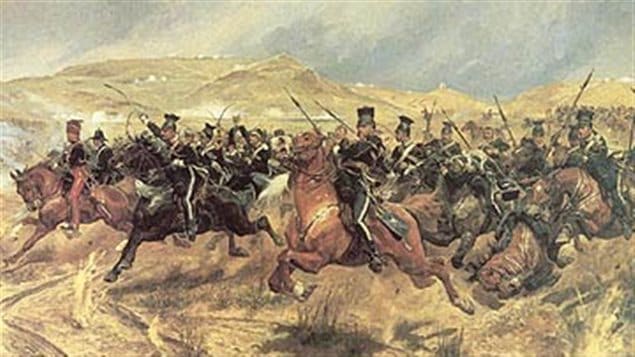 “Forward, the Light Brigade! “Charge for the guns!” he said: Into the valley of Death Rode the six hundred.

It is a most famous poem, written by Alfred, Lord Tennyson to commemorate in true Victorian fashion what was in fact a catastrophic blunder as noted in the second verse

Nevertheless, a Canadian. Alexander Roberts Dunn, was a Lieutenant in the 11th Hussars making the charge against Russian forces at Balaclava on October 25, 1854.

Dunn typified the dashing cavalry officer of the time. At 6 ft 3in tall, he was much taller than average for the time and indeed had Wilkinson Swords fashion him a sabre several inches longer than regulation issue.

Commading F troop at the time, he was among the 630 entering into a long heavily defended valley with a 12 gun battery at the end.

They charged up the valley and Dunn  repeatedly led his troops against the guns. However, forced to retreat under withering fire, Dunn noticed his sergeant struggling with his severely wounded horse whom three Russians had singled out as a straggler. Dunn rushed back, cut them down, and then lifted the sergeant onto his own horse, swatted it on the rump to send it back to British lines. Now on foot he noticed one of his Privates, Harvey Levett in danger of being cut down by another Russian. Rushing over he skewered the enemy with his extra-long sword saving Pte Levett

Dunn made it back safely but is reported to have wept when he realized how many had been lost.

For his courage, Lt Dunn became the first Canadian and indeed was among of the very first in the British military, to receive the Victoria Cross, the Commonwealth’s highest award “for Valour”. He was also the only officer to be so recognized for actions at the Battle of Balaklava.

The charge itself was a complete blunder. The Light Cavalry was supposed to harry a retreating Russian battery, a task well-suited for them with their lances and swords,  but due to miscommunication, the Brigade was instead sent against a completely different and well-prepared battery in a full frontal charge at the end of a long well-defended valley.

Surely realizing the futility and probable mistake in the orders, the cavalry nonetheless charged and did in fact reach the Russian artillery after a mile long ride up the valley against withering enfilading fire as well as directly from the front. While they temporarily forced the artillerymen from their guns, as they withdrew the Russians returned and fired against the retreating force.

The later tally showed  118 British killed, 127 wounded, and about 60 taken prisoner. Of the Brigade only 195 men were still with horses.

Dunn was killed in 1868 in unusual circumstances during a hunting trip at Senafe in what is now Eritrea.

The Charge of the Light Brigade

Half a league onward,

All in the valley of Death

“Charge for the guns!” he said:

Into the valley of Death

Was there a man dismay’d?

Not tho’ the soldier knew

Theirs not to make reply,

Theirs not to reason why,

Theirs but to do and die:

Into the valley of Death

Cannon to right of them,

Cannon to left of them,

Cannon in front of them

Storm’d at with shot and shell,

Boldly they rode and well,

Into the jaws of Death,

Into the mouth of Hell

Flash’d all their sabres bare,

Flash’d as they turn’d in air,

Charging an army, while

All the world wonder’d:

Right thro’ the line they broke;

Reel’d from the sabre stroke

Then they rode back, but not

Not the six hundred.

Cannon to right of them,

Cannon to left of them,

Storm’d at with shot and shell,

While horse and hero fell,

They that had fought so well

Came thro’ the jaws of Death

Back from the mouth of Hell,

All that was left of them,

When can their glory fade?

O the wild charge they made!

All the world wondered.

Honour the charge they made,