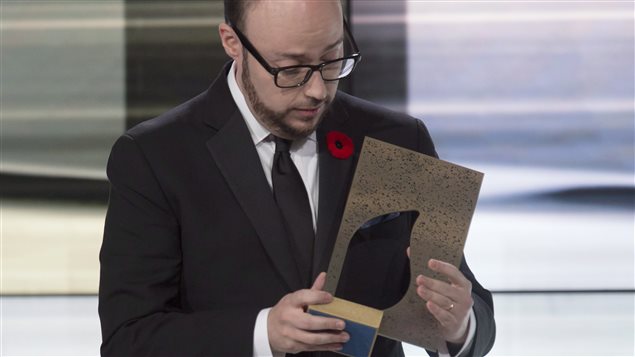 Sean Michaels looks down at the trophy after winning the Giller Prize for his book "Us Conductors" at the awards ceremony in Toronto on Monday November 10, 2014.
Photo Credit: PC / Frank Gunn

“This year has been a complete remaking of my professional life.”  Sean Michaels still appears to be part stunned, part amused, but entirely delighted by what 2014 brought him.

The Scottish-born, Ottawa-raised, Montreal-based journalist has been writing for years.  Articles and opinion pieces about music, mostly, but not exclusively.

Actually, in 2010 and 2013 he won awards for two non-music-related features he penned, including one in which he shone a spotlight on a secret society that restores Paris’ underground infrastructure.

Music is his thing though.  Michaels created one of the first music blogs on the web, Said The Gramophone, a little over a decade ago.

“Journalism is such a wonderful, noble, rewarding career, but I have to admit that I have always quietly, secretly nurtured the hope that one day I could be an author, a novelist, and that it could be my primary pursuit.” 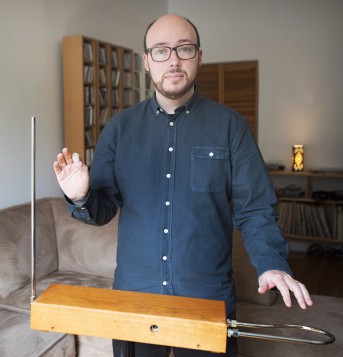 Author Sean Michaels poses for a photograph next to a theremin at his home in Montreal, Friday, October 24, 2014. (Photo credit: THE CANADIAN PRESS/Graham Hughes)

Fittingly, Michaels’ debut novel is a fictional tale based on the life of Russian scientist Lev Sergeyevich, who invented one of the earliest electronic musical instruments, the theremin, at the beginning of the twentieth century.

Us Conductors was published this year and just a few months after its release, the book was shortlisted for Canada’s top literary award and its richest, the $100 000 Giller Prize.

In November, it won.  The three-person jury praised the author’s descriptive abilities, explaining:

“As the narrative shifts countries and climates, from the glittery brightness of New York in the 1920s to the leaden cold of the Soviet Union under Stalin, the grace of Michaels’s style makes these times and places seem entirely new. He succeeds at one of the hardest things a writer can do: he makes music seem to sing from the pages of a novel.”

Sean Michaels spoke to RCI about his year, US Conductors, and what lies ahead for him: