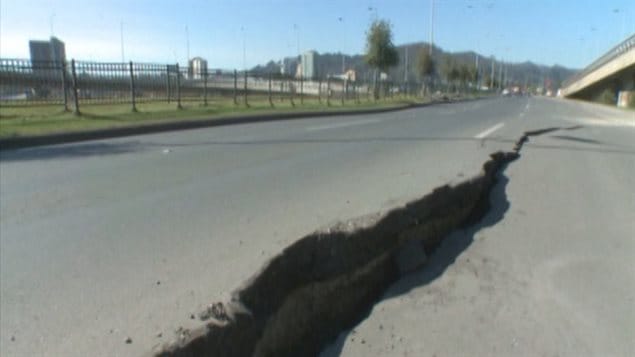 A Natural Resources Canada seismologist says there is a one in 10 chance of a megathrust earthquake off the B.C. coast in the next 50 years
Photo Credit: CBC

Is this “the big one” coming?  Maybe,… or maybe just one of the “big ones” –plural, that may wreak havoc on the west coast of North America.

An expert is warning a megathrust earthquake is in the works off Vancouver Island on Canada’s west coast. She says the epicentre will be not far from Pachena Bay on the Pacific side of the island

A similar megathrust quake on Boxing Day 2011 in the Indian Ocean resulted in a tsunami that killed over 220,000 people.

Alison Bird, a Victoria-area Natural Resources Canada seismologist says the Cascadia subduction zone off the west coast of Vancouver Island has two tectonic plates locked together and which have been slowly building pressure for hundreds of years.

She says scientists have evidence of  a massive magnitude 9 quake and tsunami on January 26, 1700 along the Cascadia zone some 1000km in length. It resulted in tremendous shaking and a subsequent tsunami that swept away the entire village at Pachena Bay, and others all along the west coast.

University of Victoria ocean engineer Kate Moran headed the first research team into the Indian Ocean area following the Boxing Day earthquake and tsunami. She described the events in 1700 and 2004 as ripping open the earth’s zipper.

The event is known in aboriginal oral history and artwork from  Vancouver Island to northern California.

Scientists in 1990 determined that it was that same quake in 1700 that caused a giant tsunami the height of a four story building which hit Japan nine hours later, on January 27, causing massive destruction there.

Scientists say there have been 13 great quakes in the last 6000 years.

Alison Bird says there’s a one in ten chance a megaquake will occur in the next 50 years.  If that happens, people on the west coast of the island would have about 20 minutes to get to high ground.

A 5.5 magnitude quake was felt in August of 2013 off the coast of north Vancouver Island, along the Nootka fault line, shaking people awake at 6.20 am, but caused no major damage.