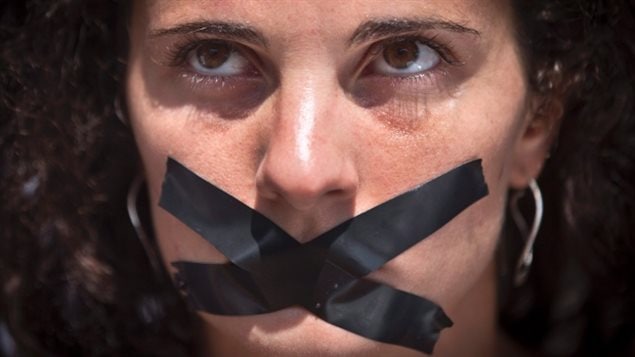 A proposed anti-terrorism law would be potentially sweeping, possibly unconstitutional, and could put a chill on free speech, say two prominent law professors. Kent Roach of the University of Toronto and Craig Forcese at the University of Ottawa have written books about Canada’s security laws have now released a scholarly critique of this new Bill C-51.

‘Effect on freedom of speech’

“Certainly the new offense of promoting and advocacy of terrorism offences in general is going to have an effect on freedom of speech,” says Roach. “The provisions for sharing information within government are really quite troubling with respect to protests, particularly protests with respect to sovereignty in Quebec or aboriginal issues.

“And we’re also quite concerned with the new powers that the Canadian Security Intelligence Service (CSIS) which is our civilian intelligence agency, will get. There is a range of concerns we have about this new bill.”

ListenSpies could violate laws and constitution

The legislation proposes to allow CSIS to violate Canadian or foreign law including the Canadian Charter of Rights with some exceptions. Even though agents could have to get a warrant from a judge, Roach says the hearings would be closed and lack scrutiny.

“Our concern is that we’re really writing a blank check to Federal Court judges to decide on the basis of these one-sided hearings about whether it’s necessary to limit someone’s charter rights or to violate the laws of Canada or some other foreign state.”

While Roach and Forcese acknowledge the need for government to share information related to terrorism, they say the bill lacks provisions to ensure the legality and reliability of such information. The privacy commissioner has echoed concerns that there is not an adequate review structure.

Government claims that the scope of the legislation in clear are not credible, says Roach. “The government has defined Canada’s security interest for the purpose of information sharing in a radical, radical way. Professor Forces and I have been, probably between us, have been looking at national security law for close to 30 years. We have never seen a definition of the security of Canada interest that is broader than what is proposed in the Security of Canada Information-Sharing Act which is part of Bill C-51. So we’re really troubled.”