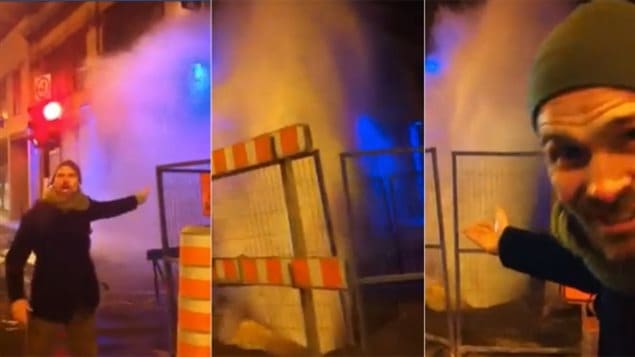 An actor came across water gushing out of the pavement on a Montreal street today and made a video calling it a “famous geyser.”

Many of Montreal’s underground water pipes are about one hundred years old and every winter several of them burst sending water gushing over city streets. The breaks must be fixed quickly and water cleaned up quickly before it freezes trapping cars and making roads impassable.

This particular break on the busy St-Laurent Boulevard sent water gushing up into the air. Jonathan Lachlan Stewart began videotaping it while offering commentary as though it were a natural occurrence and a tourist attraction.

“Hi, we’re in Montreal, Quebec, in front of the famous geyser,” Stewart tells the camera.

“A little known fact — this geyser has existed in Montreal all these years and nobody has uncovered it.”

The video was posted on social media and has proven popular. A little humour goes a long way in eastern Canada where temperatures have been more frigid than usual this winter.