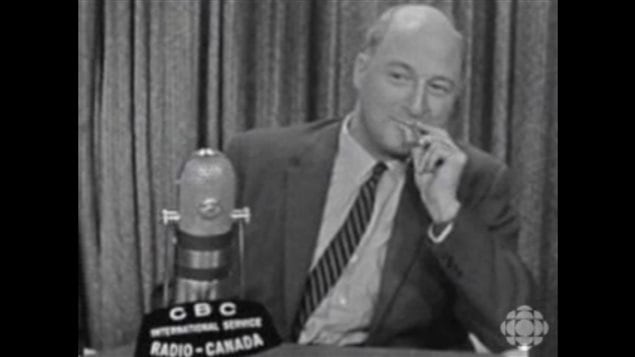 On the 21st anniversary of RCI in 1966, CBC-TV producer Erich Koch was invited to talk about on the TV show "Take 30, about his years with RCI as one of the original hosts of the German service. Note the ID beneath the microphone which shows Internationaol Service- the name of the shortwave service at the time. Note also, smoking on camera was acceptable at the time.
Photo Credit: CBC

On the occasion of its 21st anniversary, innovative half-hour television show Take 30 invited one of its producers, a former host with RCI to talk about the broadcaster.

Begun in 1962, by 1966 Take 30 had evolved into an interesting news-magazine show mixing live interviews, documentaries and reports on a wide range of social, cultural, and political topics.

Interestingly, at this time the Take 30 hosts were Adrienne Clarkson, who would much later become Canada’s 26th Governor General, serving from 1999 to 2005, and Paul Soles, who also provided one of the main character voices for the iconic animated Christmas show, Rudolph the Red nosed Reindeer, and for several other animated shows, as well as TV-drama and stage roles.

Guest on this show was Erich Koch, who was among the very first broadcasters at what was then known as the “International Service”.

It is interesting to note that smoking on-screen was accepted as the norm. Not only would it be considered a major social bad step these days, but in Canada, smoking in public buildings is against the law.

Also of note is that at the time, O Canada was not the country’s official anthem and only became so in 1980

(clip will play after commercials)