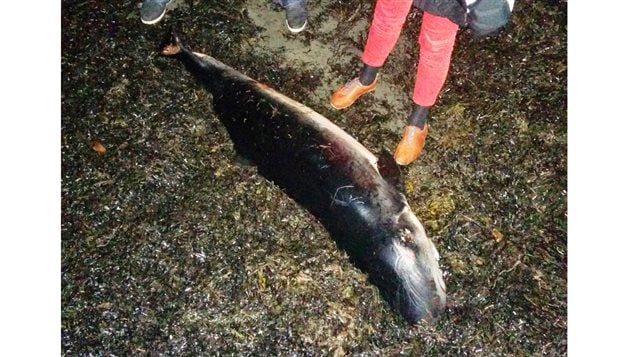 It was a rare and tragic find.

A recent necropsy performed by students at the Atlantic Veterinary College revealed that the animal had some cuts on it’s tail and jaw from an unknown source, but that certainly a contributing factor in the eventual death was an amount of plastic waste the animal had eaten. .

In the necropsy, the biology students found the various bits of plastic waste had lumped together blocking the stomach, such that the animal likely could not eat.

Tonya Wimmer  is the coordinator of the Marine Animal Response Society which is the response network which operates a toll-free hotline for the reporting of dead and distressed marine animals (whales, seals, sea turtles and sharks) for the Maritime provinces in Canada.

She was quoted by CBC news saying ,”We actually found quite a few plastic bags and plastic strapping — the kind you’d find on boxes of paper or on fish bait boxes. The animal had actually ingested it and got basically lodged just before its stomach, which meant it couldn’t feed after that,”   She added,  “It wasn’t even that much plastic. Everyone sort of gasped and stopped.”

Contacted by RCI, she indicated that it’s not certain precisely what role the injuries or the plastic played in the animal’s eventual death, but that “it is a stark reminder that plastic has no place in the oceans and that people have the power to eliminate this threat.”

Pygmy sperm whales, which grow to about 3-4 metres, are rarely seen in Canadian waters, and much of what is known about them comes from examination of stranded animals. It’s thought that plastic, floating or suspended in the water, resembles the whale’s typical food of squid and octopus and thus attracts them to ingest it.

There have been many incidents of a variety of whales dying from ingesting plastic. In 2013 a large sperm whale washed up on Spanish shores and was later determined to have died brom 17kg of various plastic wastes from plastic sheeting, to nylon rope, plastic bags etc. which had completely blocked its stomach.

In 2014 a young female sei whale, 45 feet long died in Chesapeake Bay in the US and it was later discovered that a shard of hard plastic from a DVD case had pierced the whale’s stomach preventing it from eating

In 2010 a grey whale washed up on the shore of Puget Sound near Seattle. Although unable to determine the exact cause of death, researches found the whale’s stomach contained 20 plastic bags,  plastic surgical gloves, other plastic bits, a pair of sweatpants, a golf ball, and other garbage.

In 2008 two large sperm whales stranded on the California coast and died. Later it was found both had large quantities of plastic trash in their stomachs and that one had a ruptured stomach, the other was emaciated from being unable to eat.

There are also documented cases of Albatross chicks dying from eating plastic garbage mistakenly fed to them by their parents, and sea turtles also fall victim to plastic ingestion as they mistake floating and suspended plastic for the jellyfish they typically eat