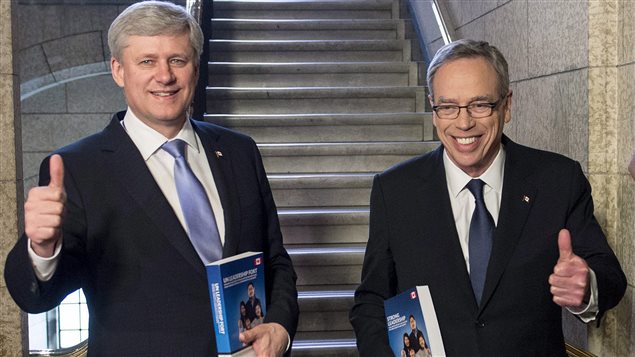 After years of deficit budgets, Canada's Prime Minister Stephen Harper (left) and Finance Minister Joe Oliver were all smiles as they tabled the 2015 budget April 21 with a surplus, using money from a contingency fund.
Photo Credit: Justin Tang/CP

Since its election in 2006, the Conservative government of Prime Minister Stephen Harper has insisted on its efficient and productive handling of the Canadian economy and government expenses.

Despite years of budget deficits, on Tuesday (April 21), Finance Minister Joe Oliver announced a slight budget surplus. However, the surplus comes as a result of the government’s decision to use $2 billion of a $3-billion contingency fund, and according to the opposition delaying the implementation of many costs only in future years.

Despite the government’s position that the budget will help middle and low-income families, the opposition parties say Canada’s wealthiest will benefit from the budget, as well as corporations, and not average Canadians.

Questioned on Canada’s public broadcaster CBC TV about how future generations would be deal with the decisions of this budget, the Finance Minister said: “I heard that by 2080 we may have a problem. Well, why don’t we leave that to Prime Minister Stephen Harper’s granddaughter to solve that problem.”