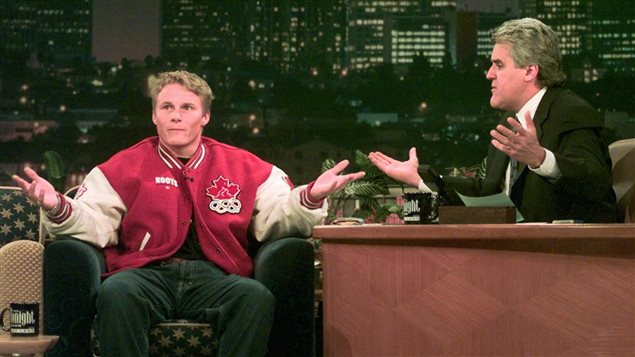 Ross Rebagliati was at the height of his fame when he appeared with NBC Tonight Show host Jay Leno, left, in the winter of 1998.
Photo Credit: AP Photo / Susan Sterner

Snowboarder Rebagliati remains a man on a mission

The Canadian man who won the first-ever gold medal in Olympic snowboarding is back in the news. And once again marijuana is involved.

You may remember Ross Rebagliati. He won gold at the 1998 Nagano Olympics, but that’s not likely what you remember him for.

It’s what happened afterward that made him famous.

Shortly after his victory, a blood test found Tetrahydrocannabinol (THC) in Rebagliati’s system. THC is the chemical responsible for most of marijuana’s psychological effects, and was automatically disqualified.

There was much chattering and much nattering, but the disqualification was eventually overturned, largely on the basis that marijuana was not on the list of banned substances.

Rebagliati got his medal back.

The international hoo-ha made Rebagliati a go-to subject for tabloid newspapers and the subject of many interviews on widely-watched television shows in both the Canada and the US.

THC has since been listed by the World Anti-Doping Agency (WADA) as a banned substance, but as more and more places around the world grapple with how to legislate marijuana use, Ragagliati is making his presence felt again.

He was in Toronto on Tuesday, promoting his company, which hasn’t obtained licences to sell the drug yet, and telling reporters he believes educating people about the health benefits of marijuana will make it mainstream and inevitably legal.

Rebagliati says the upcoming federal election in Canada is a chance for political parties to progress on the necessity of using cannabis as a medicine.

The governing Conservatives hold the position that a full criminal ban continues to be warranted.

The Official Opposition, New Democrats, are in favour of decriminalization while the Liberal Party supports legalizing marijuana.