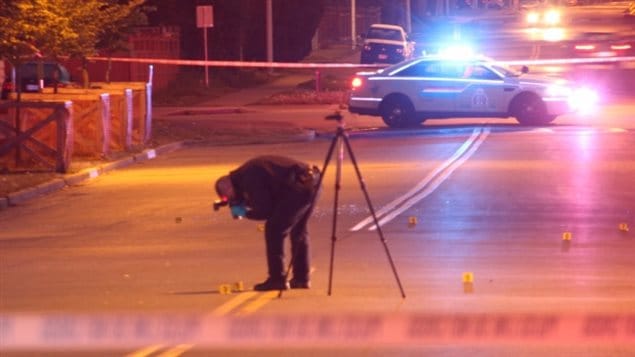 A police technician photographs the scene of a recent shooting in the western city of Surrey, British Columbia.
Photo Credit: Rafferty Baker/CBC

There was more gunfire in the western city of Surrey, British Columbia early this morning, bringing the number of shootings to more than two dozen since the beginning of March.

Police say shots were fired from one car to another vehicle just before 2:30 am local time. One vehicle fled but lost control and hit a post. The other pulled up behind and a someone inside it fired more shots. A man in his 20s who is known to police ran away uninjured.

Police are investigating whether this most recent shooting incident is related to an escalating gang war over turf and the drug trade.

In late April, police organized a forum on gang violence and the province’s premier has announced a grant of $270,000 to a police program which helps youth at risk of becoming involved with gangs.