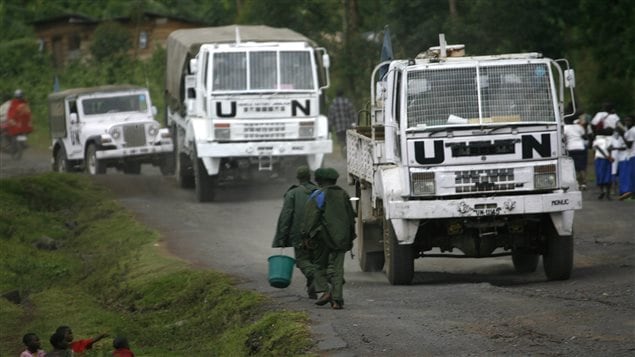 In 2008, the president of the Democratic Republic of Congo asked the United Nations peacekeepers to leave amid allegations of sexual abuse and corruption.
Photo Credit: Jerome DelayAP Photo/File Nov. 21, 2008

Experts are demanding an end to sexual exploitation and abuse by peacekeepers and an investigation into why the United Nations has not solved the problem that has gone on for decades. A global campaign was launched to end the immunity that protects sexual abusers on UN missions and to call for an independent investigation by international jurists.

“Over the last two decades, a succession of media accounts have exposed appalling sexual exploitation and abuse of women and children by both civilian and military UN peacekeepers from Bosnia to West Africa, from Haiti to the DRC. And those are just the cases that have come to light,” read a news release from AIDS-Free World which is spearheading the “Code Blue” campaign.

An “intractable problem” is the general immunity from prosecution that protects civilian personnel who are on UN missions. The convention which provides this, must be rewritten to exclude protection from prosecution when it involves allegations of sexual abuse or exploitation, says Stephen Lewis, co-director of AIDS-Free World and former Canadian ambassador to the United Nations.

“We’re pressing to have immunity absolutely removed,” says Lewis. “Why should anyone have immunity for acts of sexual violence.”  Lewis says if that is removed, then investigations would proceed more quickly, justice would be done, and the military would get the message that they can’t engage in sexual violence either.

‘Why does it continue’

Funding would come from concerned organizations and international jurists “of high reputation” would be recruited from around the world, says Lewis, “to figure out what is going wrong inside, why does this systemic abuse continue, why does this system failure within the United Nations…tolerated, why does it continue.

Among those supporting the campaign are Canadian Retired Lt.-Gen. Romeo Dallaire who was the commander of the UN mission during the Rwandan genocide, Graca Machel, founder of the trust that bears her name and others.