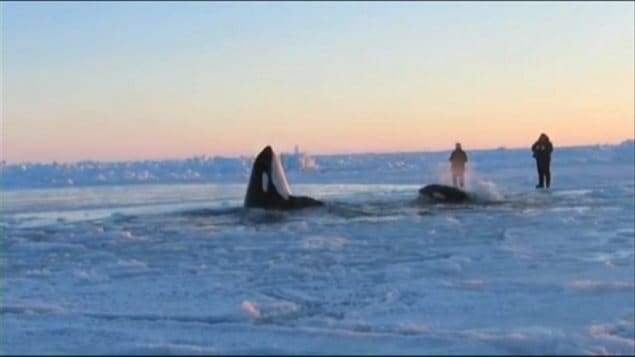 January 2013: several orcas trapped in ice off the shore of Quebec in Hudson Bay come up for air in a small hole still open. In February, some 70 beluga were trapped in a similar manner. Local Innu say the abnormal presence of freshwater from hydro dam releases changes the environment and ice conditions, creating the unnatural freezing which can trap the animals
Photo Credit: via CBC

Research into climate and human effects on Hudson Bay

The 2012 documentary film “People of a Feather” told the story of how a giant hydro-electric project in Quebec had changed the lives of the aboriginal hunters in Hudson Bay, and not for the better.

Although the hydro-electric mega project on the Grand River in James Bay is quite distant from the community of Sanikiluaq, the massive plumes of fresh water release have changed the environment say the residents.  They say it’s changing ice conditions and disrupting the cycles of the wildlife, both land and sea, that they depend upon.

RCI interview- people of a feather

This month, Natural Sciences and Engineering Research Council of Canada (NSERC), the University of Manitoba and Manitoba Hydro announced a multi-million dollar research project.   The study is called- “BaySys — Contributions of climate change and hydro-electric regulation to the variability and change of freshwater-marine coupling in the Hudson Bay system”

The study will examine the role that freshwater plays in the Hudson Bay marine and coastal systems. The  research team will include scientists from Manitoba Hydro and the University of Manitoba, Laval U, and the university Québec à Rimouski from the province of Quebec, U Calgary in Alberta, U of Northern British Columbia, and Trent University in Ontario.

Their research will provide a scientific basis to separate the relative effects of climate change from those of hydroelectric regulation of freshwater on changing physical, biological and biogeochemical conditions in Hudson Bay.

Local residents say normally a great deal of freshwater flows into the salty bay in springtime with snow melt and runoff. They say that the mega-dams hold back vast amounts of freshwater which released abnormally in midwinter in order to generate power to heat homes in southern Canada and the northern US.

PEOPLE OF A FEATHER TRAILER

Hydro Québec claims water fresher than 25 parts per million salinity does not enter Hudson Bay. Joel Heath is a biologist invovledi nthe documentary People of a Feather.  In 2013 he said measurements by Inuit during the winter showed extensive freshwater, of less than 15 ppm salinity, was reaching deep into Hudson Bay around the Belcher Islands. In winter, the marine environment of Hudson Bay is usually quite salty, at about 30 ppm, he said.

A press release from the University of Manitoba says.” This research will provide the basis for decision making around existing infrastructure operations and core fieldwork components. In addition, it will enhance the quality and capacity of environmental science in the regions in which it operates, produce reliable assessment of impacts of climate change on water supply, and increase our understanding of the effects of climate change on northern ecosystems. More broadly, Nunavut and Canada will benefit from a better understanding of how season shifts in freshwater, sediment and nutrient delivery and climate change may affect primary and fisheries productivity, and transportation in Hudson Bay and how this may change under a future climate.”