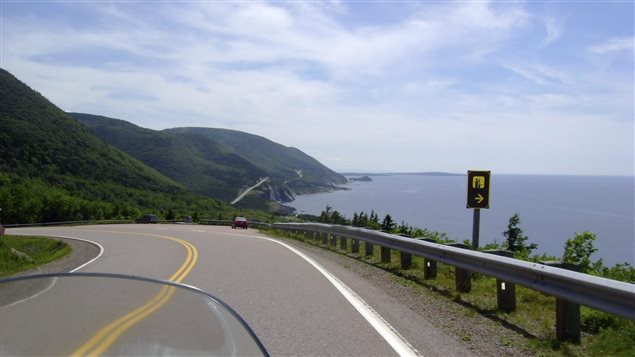 The Cabot Trail, one of the great drives in the world, this is a view of the road along the eastern coast of Cape Breton Island, Nova Scotia.
Photo Credit: AP / Glenn Adams

Canadians are taking shorter summer vacations and not going as far as they once did.  It appears the family road trip to visit Prince Edward Island or ‘do the Cabot Trail’ in Nova Scotia, is a rare event these days.

Greg Hermus, associate director of the Canadian Tourist Research Institute at the Conference Board of Canada, says “disposable income growth has not been very strong” so people can’t afford to go too far from home.  While gas prices dropped in the last year, they are still generally up over a dollar a litre, which makes distant destinations rather costly.

Almost 74 per cent of Canadians are planning a summer vacation, but that number is steadily, though slowly decreasing.  Changes in lifestyle, with children often enrolled in expensive summer camps, have altered the summer landscape.

It appears short trips of two-day duration are becoming more popular, whereas the two and three week vacation many families enjoyed in years gone by, are becoming obsolete.

Also, of those planning a vacation, there is a significant drop of 8 per cent in those who are planning to spend the time in Canada.

Greg Hermus cautions that the survey of 1500 Canadians was conducted in February, which was the coldest on record, in 115 years this year, which may have played a role in people’s thinking and plans.  It was a long hard winter, so ideas of travel to much warmer climates may have been paramount at that time..