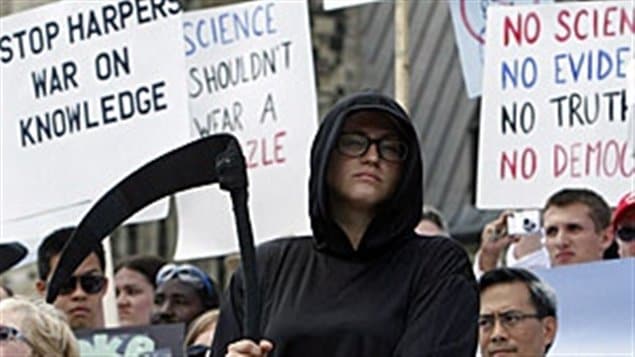 There have been protests against the constraints put on federal scientists by the government and there will be more this week.
Photo Credit: Fred Chartrand / Canadian Press

Scientists working for the Canadian government feel so constrained that they are asking that their collective agreement include wording that would protect their right to speak about their work, reports the Globe and Mail.

The current government forbids scientists from speaking to reporters without its prior approval. The process is arduous and often media requests are denied or answered too late.

A ‘culture of message control’

Canada’s information watchdog is investigating complaints that scientists have been muzzled, and a science advocacy group called Evidence for Democracy told the Globe there is “a culture of message control…in which government scientists are increasingly inclined to avoid contact with the public or the media out of fear of reprisals if they are quoted on their areas of expertise.”

Negotiations between the government and the union are set to resume this week and the union will ask that clauses be added to the collective agreement ensuring “researchers can speak opening about their work, publish results without fear of censorship and collaborate with peers,” reports the Globe.

Demonstrations are planned in Ottawa on Tuesday, May 19th to support the union initiative.

There are 15,000 scientists and engineers employed in Canada’s public service.