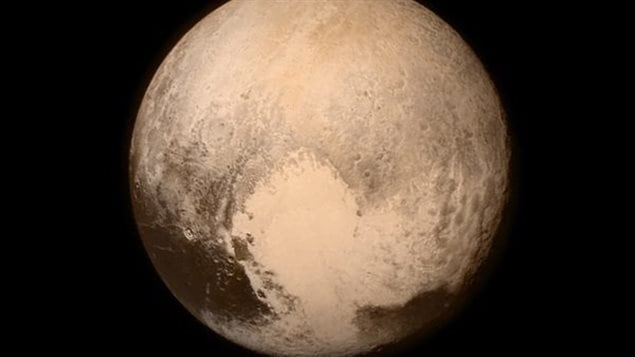 Pluto at the Planetarium

Pluto is capturing imaginations now that we’re receiving clear images of the dwarf-planet.  New Horizons, the spacecraft launched by the United States on January 19, 2006, has arrived at the end of the solar system, and scientists are excited, and holding their breath that the move through Pluto’s system will continue according to plan.

Loic Quesnel, is an animator and creator of programs at Montreal’s Rio Tinto Alcan Planetarium. He and his colleagues were celebrating today as the fly-by took place this morning. The planetarium is spotlighting Pluto and its five moons, in one of its latest shows; Pluto: Chronicles of an Ex-Planet.

Loic explains that Pluto’s demotion to ‘sub-planet’ came with the discovery of other large formations in its system and in 2005 the new data forced astronomers to define a planet: it must orbit the sun, it must be round, and it must be alone in its orbit, and this last criterion is where Pluto did not pass the test.

The show tells the story of Pluto’s discovery, how it was named, and how it then became a sub-planet. And as the spacecraft continues to send back information and data, that will keep scientists busy for the next year, the planetarium staff can update the show.

The heart shape on the planet that’s now described as red, when it was formerly thought of as grey, is made of chemical elements turned into ice as the planet is frigid, with a temperature of minus 230 celsius.

But it’s all a great reason for a celebration and the Planetarium is hosting its first ‘adults night’ on Thursday July 16th, with a party called ‘Plutopalooza‘. The gathering, in the Cosmic Courtyard, will feature drinks specially created for the event.

What we don’t know about the universe, is the subject of the other feature at the Planetarium. Dark Universe: Voyage to the Heart of Dark Matter.  This program was produced by the Hayden Planetarium of the American Museum of Natural History in New York* and it is narrated by famed astrophysicist Neil deGrasse Tyson.

As for the next horizon for New Horizon, that has yet to be decided.