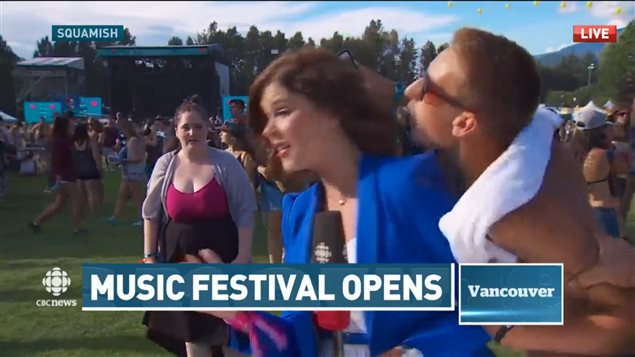 This was one of several incidents where female journalists have been interrupted while reporting live on-camera.
Photo Credit: CBC

Reporter gets apology but is still harassed online

The 17 year-old who kissed a reporter while she was doing a live report last Friday has apologized to her, but she continues to be attacked online by others for initially filing a complaint with police. This incident was different from a rash of others in Canada and the U.S. where people have rushed female reporters and shouted obscenities at them. But it was nonetheless upsetting for the reporter.

The teen took to twitter to identify himself and say he was sorry. He said that, at the time, he thought the kiss was hilarious. But after seeing interviews with the reporter and seeing the backlash she has suffered, he knew he was wrong.

Online, people have written lewd and aggressive messages to the reporter. They have called her names and dissed her intelligence and looks. She says she is trying to ignore the comments and hopes that now that she has accepted the apology, the comments will die down.

She adds it is up to police to decide whether to press charges or now, but she doesn’t want the teen’s future hampered by the action he now regrets. She also hopes that people who think these incidents are funny, will think twice and consider reporters are just trying to do their jobs.