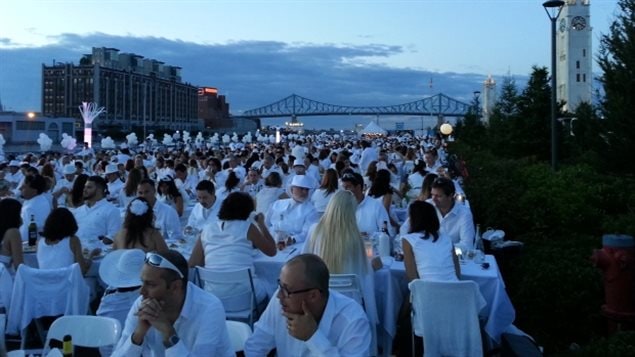 Dîner en Blanc, like many great traditions, began in France 27 years ago. Over the years, the idea crossed the Atlantic and has taken root in Montreal.

Secret until the last minute

Thursday night was the 7th occasion celebrated here..It began around 6 p.m. as thousands of friends and acquaintances, dressed in white, congregated at the venue, which remained secret until the last minute. This year it took place along the Old Port in Old Montreal.

Participants are expected to wear formal white clothing as part of the celebration. They bring their own white tables and white chairs and picnic baskets. Many come by metro, and chartered bus.

Organizers describe several great moments, including the beginning of the dinner with a wave in the air of a white napkin.  It’s quite something when 6,000 people do it in unison. And following dinner, the lighting of sparklers to inform people they’re now free to mingle and dance.  A trumpet sounds the end of the evening.

Paris’s Dîner en Blanc is now attended by nearly 15,000 per year. In Montreal organizers were expecting close to 6,000 people.