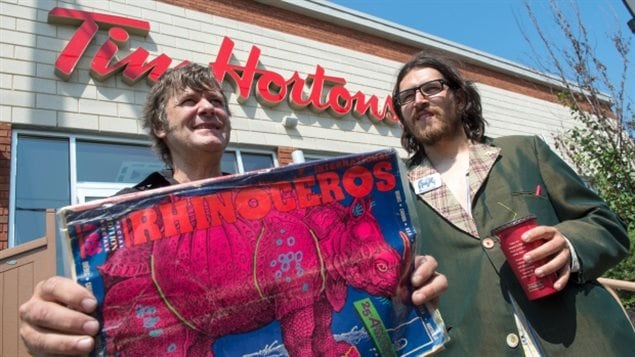 As the longest Canadian federal election since the 19th Century inches forward, a little levity might help. The Rhinoceros Party is poised to fill the void.

The Rhinos, who have been running in federal campaigns off and on since 1963, don’t have a full slate of candidates yet but they do have a platform and an agenda.

Boy, do they have a platform and an agenda!

Hoping to build on the momentum, the Rhinos are promising to privatize the Canadian Army and nationalize the country-wide donut and fast-food chain Tim Hortons.

They also would move Canada’s capital from Ottawa to Kapuskasing, Ontario.

Despite their proposals, the party sometimes has problems getting its message across.

Earlier this week party leader Sebastien Co-Rhino Corriveau called a press conference to announce Tim Hortons nationalization plans at a news conference at one the company’s franchise restaurants in east-end Montreal. He was thrown out.

Corriveau, who is running in an eastern Quebec riding, then had to improvise by meeting reporters across the street in front a military base.

On Tuesday, he spoke about the party’s platform and plans.