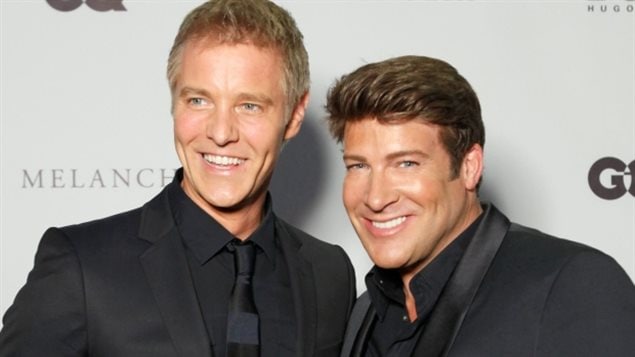 Steven Sabados (left) and Chris Hyndman, the much-loved co-hosts of their self-named show on CBC. Steven Sabados confirmed today he will not continue the program after Chris's death on August 3, 2015.
Photo Credit: CBC

‘Steven and Chris’ will not return to television, Sabados says

‘Steven and Chris‘, the CBC’s popular afternoon lifestyle show is over. Steven Sabados says “it’s impossible for me to even imagine” continuing the program without Chris Hyndman.

Steven Sabados is grieving the loss of his partner in life, and on the show, since Chris Hyndman died on August 3rd. He was found without vital signs in a laneway near the home he shared with Sabados. There was speculation that sleepwalking may have been a factor in the death.

Chris Hyndman was born in Ottawa, and grew up in Newfoundland. He became a make-up artist and was a great promoter of Steven’s design work and hopes and plans for a television career.

On an audition for the Designer Guys, when Hyndman accompanied Sabados, a producer took note of the great chemistry, and auditioned the duo. From that start, the pair went on to co-host their hi-energy show on CBC. It has been on the air since 2008, and built a loyal following in Canada.

Sabados confirmed he would not continue with the popular program, marking its end, when he wrote a Facebook post today.

“Some of the best times in my life have been at the CBC — creating an incredible show with Christopher by my side and a fantastic team behind the scenes. That being said, it’s impossible for me to even imagine continuing the show without him. The CBC understands and supports my decision 100 per cent and I hope you can as well.”