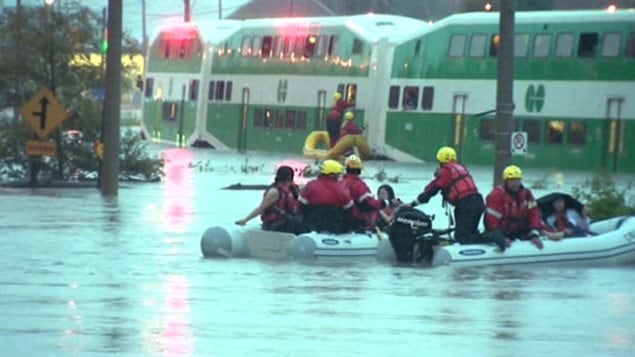 July 2013: Passengers from a commuter train in Toronto had to be rescued as an abnormal amount of rain fell suddenly on Canada's biggest city. City cewers were unable to cope with the amount resulting in major flooding of streets, highways and the dity subway system.
Photo Credit: CBC

Wild weather: cities not planning for the “new normal”

David Phillips is a senior climatologist at Environment Canada.

He says municipalities are still stuck in old planning ideas when the both the changing climate and changing urban centres require new concepts to cope with the new normal of wilder weather.

“There is no “normal” weather anymore” D Phillips

Phillips says the “normal”, ie general stable expectations of climate and weather are things of the past. He says the unexpected is the new normal.

The new normal also means that the extreme conditions of “100 year events” or 50 or 30 year weather events- snow or ice storms, droughts or floods- have now become five or 10 year events.

These also mean that there are huge costs involved. When older storm systems can’t handle sudden massive rains, the flooding causes great disruption and results in vast and costly damage.

Communities built on land that historically experienced mild flooding perhaps once every 100 years, are now being inundated regularly and severely damaged.

Phillips says that even if you took a similar violent storm from 50 years ago, cities and lifestyles have changed.  Green spaces in and around cities always help to mitigate weather conditions, but cities have grown, replacing green spaces with asphalt and concrete so the water is not absorbed but accumulates into a flood.

A coastal area once inhabited by only a few, now is completely covered with houses and cottages. With sea levels higher, and residences full of expensive hi tech tv’s and other gear, damage from that same storm of 50 years ago is necessarily increased.

The Insurance Bureau of Canada said insurance claim payouts from severe weather events were not notable prior to 2011.

Phillips points out that global warming doesn’t necessarily mean shorter winters and more pleasant summers, but a greater number of extremes. He also refers to “weather whiplash” where you have too much rain one year, and not enough the next.

Phillips says municipal planners should realize that building for the “new normal” while slightly more expensive at first, could really save money by enabling infrastructure to cope with the changed climate and thereby avoiding a very costly and potentially deadly weather disaster.