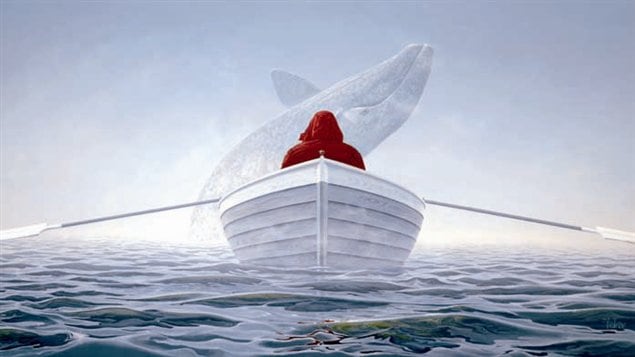 This week, a conversation with Canadian painter, Christopher Walker who has been one of the feature artists in the prestigious  Arabella magazine of art architecture and design.

Originally from Montreal, he later worked in southern Ontario designing and illustrating science books where his skills as a draughtsman were important.

Later moving to Canada’s west coast and the incredibly scenic Denman Island, he pursued his more artistic desire, although the precision of his detailed work remains evident even as the work became more evocative, philosophical, and enigmatic.

Tending toward larger canvasses, in the range of 60cm by 120cm, his paintings often feature the magnificent backgrounds of west coast scenery, although certainly not limited to west coast themes.  Wildlife is also featured and can be in the semi-background or be the foreground subject.

Certainly however, that does not describe all of his work. A commissions to capture in paint, the castles of the prairies, the iconic grain elevators, lonely sentinels rising from the flat prairie landscape is but one example of treating different subjects.

Another is his own personal tribute to the thousands of Canadian air and ground crew who served in the Second World War, with another realistic conception of a Lancaster bomber returning safely to land at daybreak after another extremely hazardous night mission, to land with its full crew as illustrated by the exact number of birds in the field below.