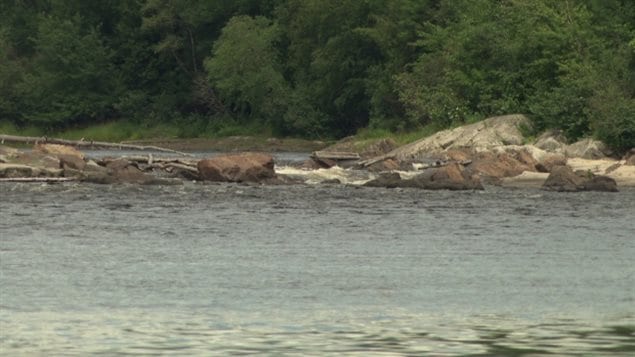 These so-called 'Nigger' Rapids, will be getting a change of name according to Quebec's Toponomy Commission, in response to Rachell Zellars petition. But Zellars wants more thought and planning put into the new name.
Photo Credit: CBC

“Nigger” name to be changed in 11 Quebec locations

‘Nigger’ and the more ambiguous word in French, ‘negre’ are no longer the ‘official’ names of 11 locations in Quebec. This is the result of Rachel Zellars petition, that was signed by almost 2,000 people from across the province of Quebec and the rest of Canada.

There was some defence of the use of the word in French, as ‘negre’ can be both the the descriptive word and the perjorative word, but many feel that with its double-entendre, it has no place, no more than the English, ‘nigger’ as the official name of any place.

Rachel Zellars, a Phd student in McGill University’s Education Department, is pleased with the move by Quebec’s Toponomy Commission to “de-officialize” the names, but she wants Quebec’s black community and scholars, to be consulted as part of the process, to re-name these places.

What was known as “Nigger Rock“, near St. Armand, Quebec, for example, is the site of a grave yard where many slaves, escaping to Canada, were buried.  This location deserves not only a new name, according to Zellars, but it must be acknowledged for what it is and honoured in a way that will contribute to further scholarly work, and hold its place in Quebec and Canadian history.

“Nigger River” near Sherbrooke, Quebec, was changed to “Niger River” in 2006, so there was some awareness of a need for change then.

Two weeks ago, Zellars sent the petition to the Commission with her requests for the re-naming process. In response she received a form letter. She then conveyed her objections to such a banal response. This time the Commission did not respond at all, but chose to issue a statement concerning the ‘de-officialization’ of the offensive names, this past Friday.

The statement includes what the commission sees as the importance of consulting the ‘entire Quebec community’ in the renaming process. Zellars disagrees! The Toponomy Commission is an all-white group of people, she says, and there is only one historian involved who has no experience or knowledge of Quebec black history. Meanwhile there are several black historians and scholars who do have the background to inform both the Commission and the public.

“My desire is that they create a round-table for a compensated meeting of these scholars that utilizes their scholarly knowledge and allows them, this group of black scholars and researchers, to propose the best way forward, the best way to preserve these black histories and lore attached to these sites, and also proposes the first list of potential names.”

The local media is following the story and these developments have been noted, however, it remains to be seen whether the Toponomy Commission will indeed, accommodate the contribution and work of Black Quebecker’s in the new names for these historical locations.