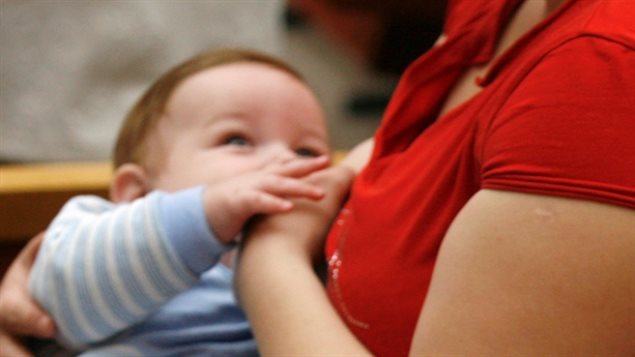 Nourri-Source Montreal created the Route du Lait, to further support breast-feeding,mothers. The route is a network of locations where mothers can feel comfortable and safe feeding their babies, and in the process, help change public attitudes about breast-feeding.

“We aim to create pleasant breast-feeding environments for mothers in commercial and community spaces, so when mothers go there they know they won’t be judged, they will be accepted for breastfeeding a baby of any age.” Genevieve Coulombe, the project manager of the ‘route’, explained.

For the last 20 years there have been recurring incidents of shaming and rejecting some mothers in Montreal when they fed their babies in public. Some of these sites were then the scenes of ‘nurse-ins’, when a group of nursing mothers would return to make very evident that women have the right to nurse wherever and whenever they want.

The Route du Lait network now has over 200 establishments across Montreal; from cafes, bookstores and shops, to hair salons and even a veterinary clinic, all these places will display the logo that lets women known they are welcome with their babies . Coulombe says all they asked of the sites, was that they provide a chair, a non-judgemental environment, and that women would not be obliged to purchase anything.

Ms. Coulombe got enthusiastic agreement from most places, but there were others that were not interested. Many Canadians, like most North Americans, were bottle-fed over the last 50 or 60 years. The promise of progress and the supposed enhanced nutrition of bottles and formula has been largely de-bunked. Healthcare advocates are now doing all they can to encourage mother’s to breast-feed.

Genevieve Coulombe cites the WHO recommendations, that encourages exclusive breast-feeding for the first six months of a baby’s life, and to continue until the age of two with complimentary food as well, if mother and baby want,

Breast-feeding has been proven to provide the best start for infants and provides so many health and emotional benefits, but it also confers health benefits on the mother as well.  These include decreased risks of breast and uterine cancer, and the convenience of being able to nurse your child with no fuss, often provides great stress relief, but not when others are shaming or judging you.

In Quebec, as in the rest of Canada, mothers have a year maternity leave. The latest statistics from the mainly French-speaking province, reveal that 96 per cent of new mothers begin breast-feeding in the first hours of a baby’s life and continue for about the first month. By six months that figure drops to about 60 per cent.

The Route du Lait was established in other cities in Quebec, but there is no word yet whether other provinces are following Quebec’s example.