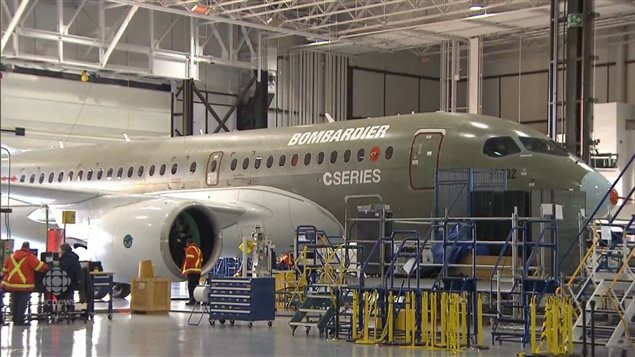 Quebec to invest $1 billion US in Bombardier

Canada’s largest aerospace company Bombardier Inc. will get a $1 billion US investment from the Quebec government as the over-budget CSeries jetliner project continues to drain the planemaker’s cash reserves.

Quebec agreed to buy 49.5 per cent of the CSeries program, Bombardier said in a statement Thursday morning.

“This partnership comes at a pivotal time, with the C Series on the verge of certification. The market is there, our leadership is in place, we have the best product and with the support of the government, we are ready to make this aircraft a commercial success,” said Alain Bellemare, Bombardier’s President and CEO.

The news comes as the Montreal-based company has posted a $4.9-billion US loss for the third quarter, mostly tied to its CSeries and Learjet 85 aircraft programs. Bombardier turned in operating results that were substantially below expectations.

The company also dropped plans to do an initial public offering of its rail business, saying it will instead aim to sell a minority stake in the unit to unidentified investors, with an announcement due “soon.”

Bombardier is also cancelling its Learjet 85 business aircraft program “due to the lack of sales following the prolonged market weakness.” But Bombardier says it remains committed to the Learjet family of aircraft. The planemaker also announced a cutback in the output of the Global 5000 and 6000 corporate aircraft.

The rescue by the Quebec government underscored the depth of the struggles with the CSeries, the planemaker’s largest-ever model. The CSeries, already running two years behind the schedule, has been an expensive and difficult project for Bombardier.

The CS100 aircraft, which is meant to compete with Boeing’s 737, Airbus’ A320 and Brazil’s Embraer in the medium-range airliner market, is expected to enter service in the first half of 2016 with Swiss International Air Lines (SWISS) as the first operator.

Bombardier has 243 firm orders for the CSeries aircraft on the books. But analysts are concerned that those orders aren’t coming fast enough.

In June, Bombardier flew both the CS100 and the larger CS300 to the Paris Air Show. The planes arrived at Le Bourget airport with great fanfare, but left without booking a single new order, despite getting great reviews.

“Bombardier needs to the get the plane into service, prove that it is successful and generate more demand if it wants to correct its cash flow shortage,” Moody’s analyst Darren Kirk told Business Insider before Thursday’s results.

But it’s not all bad news for Bombardier. Aerospace industry analysts forecast that there is room for as many as 2,500 planes in the 100- to 150-seat jet category. The CSeries could also capture some of the market left vacant as both Boeing and Airbus phase out their older mid-range planes.