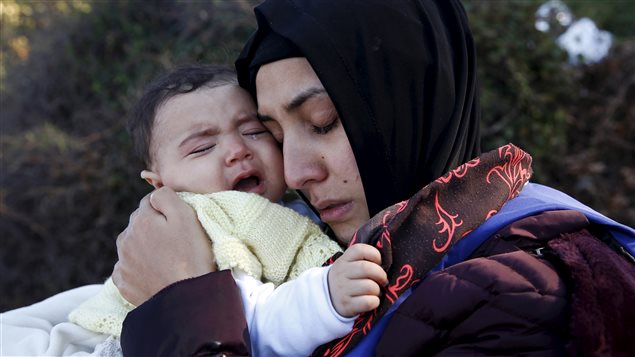 A Syrian refugee hugs her crying baby after arriving on a raft on the Greek island of Lesbos, October 27, 2015.
Photo Credit: Giorgos Moutafis / Reuters

The massive operation required to bring in 25,000 Syrian refugees to Canada until the end of the year, as promised by Prime Minister-designate Justin Trudeau, will require the mobilization of the country’s full diplomatic and military resources, experts warn.

“It’s actually a very big promise that I believe is going to be very difficult to meet,” said Kyle Matthews, a fellow at the Canadian Global Affairs Institute, in an interview with Radio Canada International. “The reality is the government will only be taking power on the 4th of November and they’ll just under two months to identify 25,000 refugees.”

Matthews, who is a former high ranking official with the UN Refugee Agency (UNHCR), says the Canadian civil service will be stretched to the limit as it tries to mobilize enough staff to travel to Lebanon, Jordan and Turkey to vet potential candidates for relocation to Canada.

Matthews says the UNHCR is expected to prepare a list of most vulnerable refugees – people who have health problems, minorities that have no chance of going back, single family-head households or vulnerable children that are unaccompanied – base on certain criteria.

“But every person before they come to Canada they have to be screened to check on their background and their identity, they have to go through health tests to make sure they don’t have a contagious disease that could have an impact on public health in Canada, so there is a whole series of measures that have to be done,” Matthews said.

And then there is the challenge of security screening.

“The sad reality is that, yes all refugees are civilian, but there could be a few bad apples among the refugee population,” Matthews said. “So they’re going to have to check everyone’s background and that’s not a process that you could simply enter into a Google search and get the answer.”

Once the Canadian government selects the refugees it wants to resettle in Canada, it has to figure out how to bring them into the country.

Experts interviewed by CBC News warn Canada’s relatively small air force would be stretched to the limit and unable to sustain regular operations if it were called to airlift the refugees from the Middle East.

They suggest chartering civilian airliners to fly in the refugees would be a better option.

In the summer of 2006, at the height of the war between Israel and Hezbollah in Lebanon, the Canadian government had to charter cruise ships and airliners to help thousands of Canadian citizens escape the fighting. Canadians in Lebanon were first ferried to neighbouring Cyprus and then flown to Canada on chartered flights.

It took 61 chartered flights and 4 flights operated by the Department of National Defence to bring in 13,370 Canadians fleeing the war.

To fulfil Trudeau’s ambitious promise would require twice as many flights.

Retired brigadier-general Gaston Cloutier  told CBC News the logistics of bringing in 25,000 people are so intense, it’s unlikely the government could meet its obligations without relying heavily on the military and its network of bases and troops across the country.

Cloutier was in charge of the 8 Wing Trenton air base in 1999 when the Liberal government at the time welcomed 5,000 Kosovar Albanian refugees fleeing conflict and ethnic cleansing in their homeland.

It’s a template Canada could use again to bring in the Syrian refugees.

Back in 1999, the military set up reception centres at two air bases: 8 Wing Trenton in southern Ontario and at 14 Wing Greenwood in Nova Scotia.

At Trenton, Cloutier established a reception centre to welcome refugees and a separate facility where they were processed by immigration and customs officials, and where they received a cursory medical examination.

He said both military and civilian police were on hand, as were officials of the Canadian Red Cross and volunteers from the Salvation Army.

However, both the Lebanon evacuation and the Kosovo operation happened in the summer. In 1999, 2,500 Kosovar refugees were housed under canvas tents at an air cadet summer camp at Trenton.

That would not be a possibility this December.