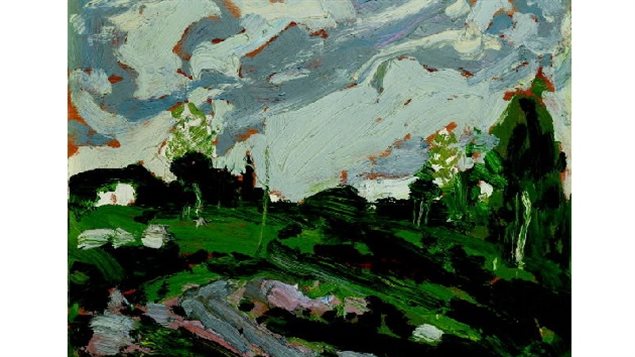 Oil on panel ; Believed to by his last painting before his mysterious death Tom Thompsons' After the Storm" has a vivid landscape under a pale blue troubled sky...still fresh 98 years after it was painted.
Photo Credit: Heffel Fine Art Auctions

Tom Thompson is one of Canada’s best known and most iconic painters.

Although not part of the equally iconic group of painters known as the Group of 7, he was greatly influenced by them, and they by him.

During his life he produced 591 oil paintings, with the last one believed to be “After the Storm” produced in the spring of 1917.

Thompson, an outdoorsman and part-time guide in Algonquin Park in Ontario, died on Canoe Lake under very mysterious circumstances on July 8, 1917.  His death, and possible murder, has never been solved.

On November 26th , this painting is going up for sale at the Heffel Auction of Fine Canadian Art in Toronto

Thompson died at the height of his talent, experts agreeing his finest work was toward the end of his life in 1916-17.

Also at auction in November are works by Group of 7 artist Lawren Harris. The paintings Winter Landscape and Mountain and Glacier are expected to fetch in the $1 million to $1.5 million range.