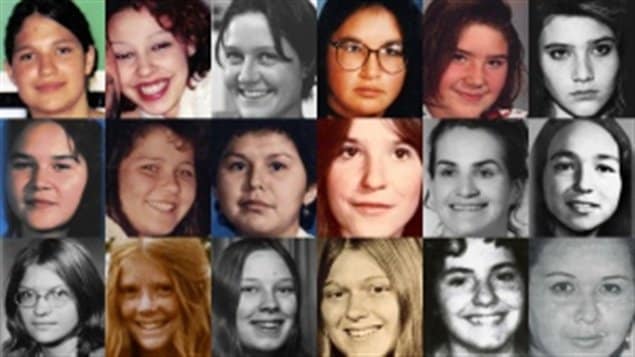 These are images of 18 women and girls either found dead or last seen on roadways dubbed the Highway of Tears in the western province of British Columbia.
Photo Credit: Individual photos from highwayoftears.ca

The government of the province of British Columbia is not listening to citizens and downplaying their worries about the infamous Highway of Tears, say opposition politicians. At least 18 women and girls, many of them aboriginal, have disappeared or been murdered along this stretch of road since 1969.

There is a lack of public transportation in the area and people needing to travel often resort to hitchhiking. The government recently held public consultations about the issue and afterwards said improved transportation on the corridor was not deemed practical by area residents.

‘That is not true’—opposition critic

The women’s critic for the opposition New Democratic Party, Maurine Karagianis, says documents released under a freedom of information (FOI law) request reveal that residents are very concerned about transportation services and want to see improvements.

“The minister has continued to tell us for a year there wasn’t a big desire for a bus, that it wasn’t a practical solution,” said Karagianis. “Certainly, looking at the FOI documents on the consultation that we have recently read, that is not true.”

These deaths and disappearances are part of the broader issue of 1,200 indigenous women who have been murdered or gone missing between 1980 and 2012. There have been demands from native groups, human rights advocates and many other quarters for a public inquiry. The previous government steadfastly refused. But during the recent election campaign, the Liberal Party promised it would hold such an inquiry if elected. It did indeed win a majority and is being sworn in to office today.