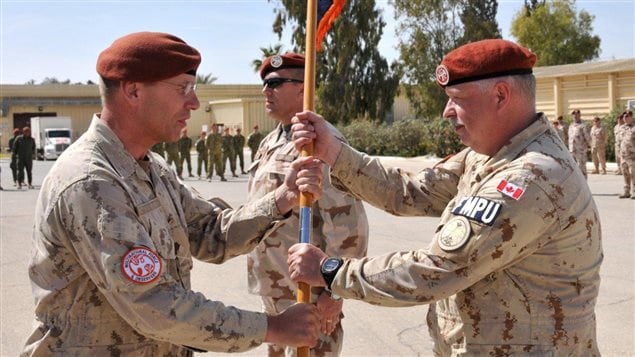 A Canadian general will remain in charge of a team of military observers in the violent border region between Egypt and Israel for another year.

“The extension of Major-General Thompson’s mandate as Force Commander of the Multinational Force and Observers is a reflection of his professionalism and dedication to carrying out the MFO’s important mandate of promoting peace and security in the Sinai and the region,” Sajjan said in a statement. “I am confident that the MFO will continue to be well served under his leadership‎.”

The MFO — a team of about 1,650 army, air and naval troops from 13 countries — was created in 1981 as part of the peace treaty between Egypt and Israel, and its role is to keep the peace in the area.

The force is spread along the border between Egypt and Israel on the east side of the Sinai Peninsula. Not many people live in the rough, arid area, but several groups of militants, including Bedouin fighters and Palestinian and Islamist fighters, are active in the region.

The Islamist insurgency in the desert peninsula has claimed casualties among the MFO personnel, requiring new and often cumbersome precautions. To fight the insurgency led by the Sinai branch of ISIS Egypt, with Israel’s consent, now routinely brings in troops, tanks, fighter jets and helicopters into the supposedly demilitarized zone.

The crash of a Russian passenger jet in Sinai on Oct. 31, reportedly brought down by an ISIS bomb smuggled on board the aircraft, has heightened the tensions even more.

The MFO soldiers, including 70 Canadians, have dug into positions surrounded with barb wire. Soldiers from Canada have served in the Sinai since 1985 as part of the Canadian Forces’ Operation Calumet. The force is there to observe what’s going on, but they also have to protect themselves.

Thompson previously worked as the commander of the Canadian Special Operations Forces Command and he was NATO’s commander of Task Force Kandahar in 2008.