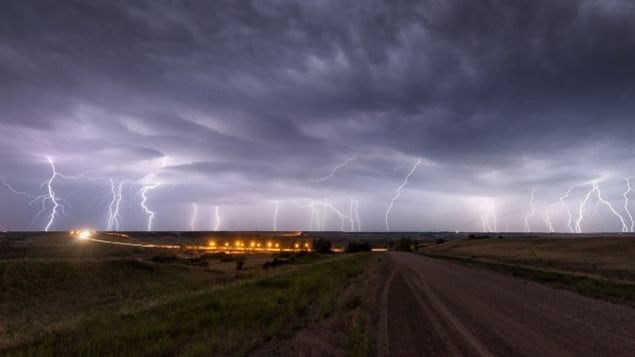 June 2015 Photographer Jeff Wizniak took this photo Friday night near Borden, Saskatchewan. The SMO released a provisional statement saying 2015 will be the warmest year on record and that the probablilty of extreme weather events over time has been increased by human induced climate change
Photo Credit: Jeff Wizniak via CBc

2015 heading towards record as warmest year in modern history

The World Meterological Organization has released a provisional statement this week saying 2015 is heading towards being the warmest year on record.

The statement was released prior to the upcoming U.N. Climate Change Conference in Paris (COP-21) starting on December 7th,in order to inform delegates of the state of the climate.

Quoted on their website, WMO Secretary-General Michel Jarraud says  “The state of the global climate in 2015 will make history as for a number of reasons,”

He adds, “Levels of greenhouse gases in the atmosphere reached new highs and in the Northern hemisphere spring 2015 the three-month global average concentration of CO2 crossed the 400 parts per million barrier for the first time. 2015 is likely to be the hottest year on record, with ocean surface temperatures at the highest level since measurements began.  It is probable that the 1°C Celsius threshold will be crossed,” said Mr Jarraud. “This is all bad news for the planet.”

Mr. Jarraud then noted, “Greenhouse gas emissions, which are causing climate change, can be controlled. We have the knowledge and the tools to act. We have a choice. Future generations will not.”

The WMO says that the world’s oceans has absorbed 90% of the energy resulting from human emissions of greenhouse gases. This has meant not only warmer temperatures in oceans to a depth of 700 metrs but also to 2000 metres. The WMO notes that sea levels have risen to their highest since satellite records became available in 1993.

WMO Statements on the Status of the Global Climate  (Eng,Fr,Russ,Sp, Arab,Ch)

The WMO climate statements are based on contributions from 191 members and t datasets from the UK Hadley climate centre, NASA’s Goddard Institute, and NOAA along with reanalysis by the European Centre for Medium-Range Weather Forecasts and the Japan Meteorological Agency.