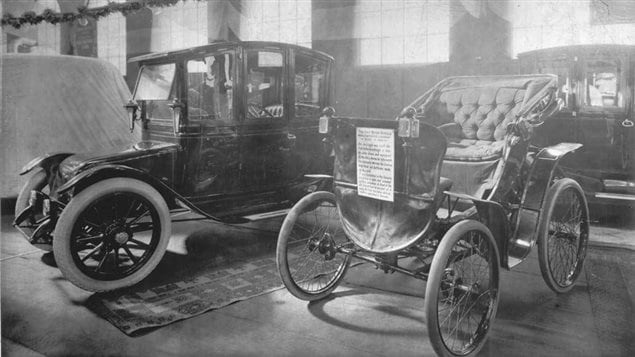 Canada's first, and one of the world's first (and much better than rivals) electric car on display at at Toronto Arnouries auto show in 1912. it is ppictured alongside another vehcile possibly and early Ford electric.
Photo Credit: Toronto Archives onds 1244, Item 56.

This one is a little harder to pin down to an exact date but some reports say that on this day back in 1893, the first electric car in Canada made its debut at the Dixon Carriage works in Toronto. (some records have the date as Dec 06 1896)

While cars were still very much in their infancy, there were three competing technologies. Electric vehicles would be competing for customers with steam and the new-fangled petroleum engines.

Frederick Fetherstonaugh, was a young patent lawyer in Toronto, Ontario, fascinated with technology, and I suppose influenced by the many patent applications for new inventions he was constantly seeing.

Electricity was in its infancy but growing rapidly in a variety of uses and new inventions.  Apparently the young lawyer also had one of the first homes with electricity.

When William Still came in to talk about his invention of a improved battery, they began talking about a fascination with the horseless carriage.

Steam power was a bit dangerous with its high pressures, and gasoline was noisy and smelly, and both could be messy and not too reliable either.

Electricity, already powering the city tramway, was clean, quiet, and not messy.

W.J.Still was soon designing a motor for power and a battery system for their car. With that completed, they contracted the highly reputed Dixon’s Carriage Works in Toronto to build a body around Still’s power plant, which was patented in Canada in 1893 and the US in 1894.

It was lighter at less than 350 kilos, than almost any competitor, and possibly much faster with the approximately 4hp motor propelling the carriage up to a speed of about 25km/h.  Depending on versions, the batteries held out for anywhere from one to five hours of use, and could be recharged by attaching wires to the tramway power system overhead lines.

Soon investors were attracted and the first auto syndicate was created, although it didn’t last long. It was followed by the Still Motor Company, taken over soon after by another, and when that failed, the building was occupied the the Canadian Cycle and Motor Company. It produced another Canadian car, the gasoline-powered Russell, which lasted to about 1916. The CCM brand lived on in bicycles for decades, and is now known for hockey equipment.

The young lawyer loved his Still car and continued driving it apparently for the next 15 years., with improvements along the way. The original model had a wagon-like steering from the central point of the front axle, The photo at top shows a later modification of a fixed axle and steering knuckles on each wheel, and added fenders to deflect splashes.

What eventually became of it is not known, but sadly it seems not to have survived.

It is a shame as it certainly seems more advanced than competitors at the time, and more than 120 years later, we are only now starting to realize the potential for electrical power for automobiles.