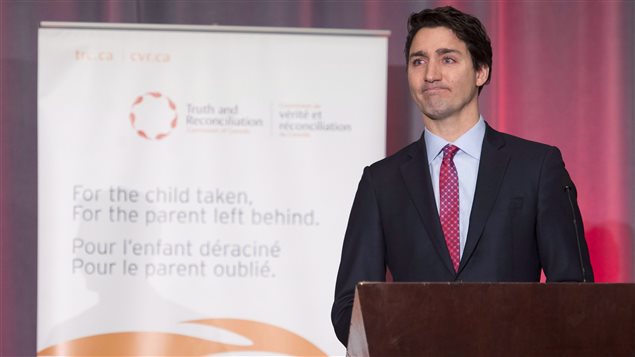 Prime MinisterJustin Trudeau speaks on behalf of the government as the final report of the Truth and Reconciliation commission is released, Tuesday December 15, 2015 in Ottawa.
Photo Credit: PC / Adrian Wyld

More than 3,200 aboriginal children attending Canada’s infamous Indian residential schools died and were often buried in unmarked graves, according to the final report from the Truth and Reconciliation Commission, which called the policy of forced assimilation “a cultural genocide.”

The commission released the report Tuesday afternoon, in an emotionally charged and highly symbolic ceremony in Ottawa, marking the culmination of six years of research.

Many students who went to residential school never returned, said the final report.

“They were lost to their families,” said the report. “They died at rates that were far higher than those experienced by the general school-aged population. Their parents were often uninformed of their sickness and death. They were buried away from their families in long-neglected graves. No one took care to count how many died or to record where they were buried.”

Sinclair admitted the real number of deaths could have been much higher than what the commission was able to document.

It is estimated that more than 150,000 First Nations, Inuit and Metis children were separated from their families and forced into residential schools over much of the last century in a deliberate policy to “take the Indian out of the child.”

“Today marks both an end, and a beginning,” said Sinclair, asking all residential school survivors and their families to stand.

“We acknowledge all of you here,” Sinclair said.

Two empty chairs were put on the stage to honour the memory of the children who never returned from the schools.

“We will lay the foundations of truth and knowledge not as a road of shame to be avoided but as a story of human collision from which we can and have learned much,” Sinclair said.

The 3,231-page final report with 94 recommendations to start the reconciliation and healing process was to be delivered to federal government and churches who were parties to the class-action settlement that led to the creation of the TRC.

Sinclair went on to compare the process of reconciliation to climbing a mountain.

“We must proceed one step at the time will not always be easy, there will be storms, there will be obstacles and we will fall down from time to time but we cannot allow ourselves to be daunted by the task because our goal is a just one and it is also necessary for our children,”

Eugene Arcand, a residential school survivor, said the TRC’s 94 recommendations, are calls for action for every Canadian, not just the government. With his voice breaking with emotion, mixing laughter and tears, Arcand praised the painful process of the commission.

“It gave us a chance to become children again,” said Arcand, fighting back tears. “We shared our tears, we shared our laughs, but we dug deep inside and we dug out the demons and we couldn’t have done it without each other.”

Arcand went on to say that the three commissioners have “awakened this country and mother Earth.”

“No one can say, unless you live under a rock or in a cave that you don’t know about this any more,” Arcand said. “Canada, this is your rite of passage. If you really are a citizen of this country, take that next step, get out of that protected environment that we were supposedly put in, and take a risk, and take that call to action.”

In an emotional speech Prime Minister Justin Trudeau thanked the survivors for their courage and for sharing their stories.

Trudeau said he remembers a moment from his time in school, from his Canadian history class, when his teacher told them that the chapter in the textbook on indigenous Canadians was not very interesting or very important and that they were going to skip it.

Trudeau said his goal and the goal of his government is to “accept fully our responsibilities and our failings as a government and as a country.”

Seven years after his predecessor Conservative Prime Minister Stephen Harper issued his historic apology to Canada’s indigenous population for the abuses suffered under the residential school system, Trudeau extended his own apology.

“The government of Canada sincerely apologizes and asks for forgiveness of the aboriginal peoples of this country for failing them so profoundly,” Trudeau said. “At the same time today there is reason for hope. Today we find ourselves on a new path, working together towards a nation-to-nation relationship based on recognition, rights, respect, cooperation and partnership.”

Trudeau called for a total renewal of the relationship between Canada and its indigenous peoples, saying that no relationship is more important to him than Ottawa’s relationship with First Nations, the Metis nation and Inuit peoples.

“Let me say it again, I give you my word that we will renew and respect that relationship,” Trudeau said to applause from the hall.

The commission’s final report provides a way forward for all Canadians, Trudeau said, saying the work has already begun with the national public enquiry into the missing and murdered indigenous women.

Trudeau vowed to implement all 94 recommendations made by the commission and said Canada will begin by acting on the UN recommendation on the rights of indigenous people.

“And we recognize that true reconciliation goes beyond the scope of the commission’s calls to action,” Trudeau said. “I’m therefore announcing we will work with leaders of First Nations, the Metis nation, Inuit, provinces and territories, parties to the Indian Residential School Settlement Agreement and other key partners to design a national engagement strategy for developing and implementing a national reconciliation framework, including a formal response to the Truth and Reconciliation Commission’s calls to action.”

“We will remember always that reconciliation is not an indigenous issue, it is a Canadian issue,” Trudeau said, drawing another standing ovation.

Perry Bellegarde, National Chief from the Assembly of First Nations, began by thanking all the survivors for thanking them for their courage, saying that thanks to their courage of standing up and speaking out no one will ever have to endure the abuses of residential schools.

“I want you all to know here that the Assembly of First Nations will work hard that the 94 calls to action are implemented,” Bellegarde said. “They will not gather dust and they will not  be put on shelves and be forgotten like so many other reports.”

Acting on those 94 calls to action could start the process of healing, Bellegarde said.

“Canada is a country that defends human rights right around the world,” said Bellegarde. “And now it is time for us to take action right here at home. Let us begin today!”