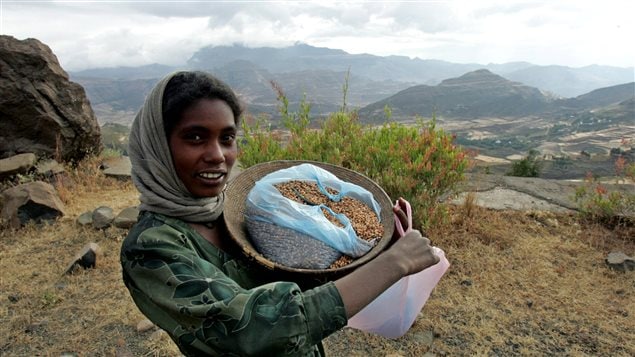 An Ethiopian girl sells barley seeds in the mountainous region of northern Tigray province November 23, 2004. Ethiopia struggles to feed its fast-growing population of 70 million, 85 percent of whom are peasants, amid recurrent drought and deep poverty.
Photo Credit: Radu Sigheti/Reuters

Marie-Claude Bibeau made the announcement in Tokyo as she met with Tedros Adhanom Ghebreyesus, Ethiopia’s Minister of Foreign Affairs.

The crisis, which is expected to affect up to 20 million people in Ethiopia, is the result of drought caused by a particularly strong El Niño event warming the Pacific Ocean and affecting global weather patterns, according to background documents released by Global Affairs Canada.

Canada’s funding for Ethiopia will help meet critical food, health and nutrition, and water and sanitation needs in response to the deteriorating situation throughout the country, the document said.

“Ethiopia can count on Canada’s continued engagement and support. We are concerned by the food security situation in Ethiopia and will continue to monitor it and act quickly to protect the poorest and most vulnerable,” Bibeau said in a statement.

Kevin Dunbar, director of Humanitarian Assistance and Emergency Team at Care Canada, whose agency will receive almost $2 million to support its work in Ethiopia said he welcomes the news.

“Ethiopia is one of the worst-hit countries and at the moment there is extreme drought, which means families on the ground don’t have enough food, and don’t have access to enough clean water,” Dunbar said speaking on the phone from Ottawa. “It’s a critical moment for the Ethiopian government and international community to step up and help people.”

The largest effect of the El Niño in Ethiopia will be felt in January and February, Dunbar said.

The money Care will receive from the federal government will be spent on meeting the immediate humanitarian needs of drought-affected families in the West Hararghe zone of Oromiya state, he said.

“The work that we’re doing in Ethiopia is in two areas: in nutrition and water and sanitation,” Dunbar said. “We’re working with the government to make sure they have the tools and the capacity to treat severe and moderate malnutrition cases in children, pregnant and lactating women.”

Care Canada is also greatly concerned by the disproportionate burden this crisis is placing on women and girls, who are largely responsible for ensuring families have food and water, Dunbar said.

“They are spending a lot more time every day walking to get drinking water or collecting and selling firewood to have some money for food,” Dunbar said.

Where is the money going?

Canada’s contribution will be allocated as follows:

The above funding is in addition to two grants, totalling $5 million, to the WFP ($3.5 million) and UNICEF ($1.5 million) that Canada provided in October 2015 in response to the drought, said the document by Global Affairs Canada.

Although Ethiopia is one of the worst-hit countries, the effects of El Niño are being felt across southern and eastern Africa, the Asia-Pacific region and Central America.