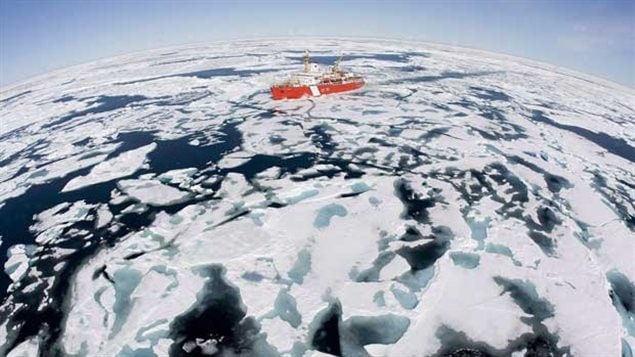 Despite growing political tensions elsewhere in the world, 2015 was a year of cooperation in the Arctic, say two Canadian Arctic experts.

“I think the single most important development in 2015 has been the continuation of cooperation in the Arctic, including centrally with Russia,” said Prof Michael Byers, Canada Research Chair in Global Politics and International Law at the University of British Columbia. “There has been no interruption of Arctic cooperation despite the significant tensions elsewhere over Ukraine.”

(click here to listen to the full interview with Michael Byers)

That sentiment is shared by Joël Plouffe, a fellow at the National School of Public Administration in Montreal and co-managing editor of the Arctic Yearbook.

“I think one of the most significant events of the year is something that happened really recently – the creation of the Coast Guard Forum, which is a really interesting organization for the region where you have all the coast guards of all of the Arctic states who are now going to be working together,” Plouffe said.  “It clearly demonstrates that beyond the Arctic Council we have other kinds of organizations, other kinds of arrangements, multilateral agreements that favour collaboration and cooperation in the north, and that includes Russia, it includes the United States.”

(click here to listen to the full interview with Joël Plouffe)

Both experts attribute the continued cooperation to the very nature of the Arctic.

“I think it’s because they have no other choice,” said Plouffe. “Basically, when you come to questions of environmental protection, you need common means to be able to work together to find solutions to some crises.”

For example, the United States, the greatest naval power in the world, has very limited capabilities in the Arctic and has to work with Russia and Canada, and other Arctic states, said Plouffe.

“First of all, there is a clear mutual interest in continuing Arctic cooperation,” said Byers. “The Arctic is a very remote and very hostile environment where countries cannot accomplish some important things unless they work together.”

Things like search and rescue, dealing with pollution from shipping, or cleaning up oil spills often require cooperation between neighbouring countries, Byers said.

The end of 2015 also marked a change in government in Canada.

Both Byers and Plouffe say they so far have seen no sign that the new Liberal government has an Arctic strategy, except with regards to climate change.

“The reason we talk about the Arctic is because climate change is having such an incredible effect there,” Byers said. “Melting the sea ice, opening up shipping lanes, making it easier to access natural resources, climate change is the dominant issue in the Arctic.”

However, the jury is still out on whether the Liberals will be able to deliver on their climate change promises, as well as other pressing issues facing Arctic communities such as sustainable economic development and investment in education and healthcare, said Byers and Plouffe.

“I’m hopeful that the Liberals are currently working on a new domestic and international Arctic strategy that will resemble a bit more the contemporary issues of the Arctic,” said Plouffe. “I’m speaking about economic development, globalization and human security issues that are really important in the north.”

Byers said one of the things he’d like the new Liberal government do is to reintroduce the office of Arctic ambassador for Canada.

“I think Canada needs a designated Arctic ambassador, someone along the lines of Sheila Watt-Cloutier, the former chair of the Inuit Circumpolar Council, who was nominated for the Nobel Peace Prize for her work on climate change,” said Byers.

Canada should re-engage with its Arctic neighbours, including with Russia with which Canada has had very fruitful bilateral ties on health, education, environmental protection and economic development in the Arctic dating back to 1950s and 1960s, said Plouffe.

Byers said he’d like to see the Trudeau government also show meaningful leadership on climate change related to the Arctic.

“And I think it needs to step up with some serious financial commitments to northern governments  to help improve the situation concerning education, concerning healthcare, concerning housing,” said Byers, “and, perhaps, centrally some meaningful action to address the crisis of suicide in northern communities in Canada, where the suicide rate is many-many times greater than the average in southern Canada.”

Icebreakers instead of patrol ships?

In terms of investment in infrastructure and the tools the government needs to operate in the Arctic, Byers said he’d like to see the Liberals finish the construction of the all-season road connecting Inuvik to Tuktoyaktuk in the Northwest Territories.

In contrast to that, Byers said he’d like to see the Liberal government very quickly re-evaluate the need for the Arctic Offshore Patrol Ships that former Conservative Prime Minister Stephen Harper promised in 2007 and finally signed the contract for in early 2015.

“Those ships are still in very early stages of construction and there would be time to change that project to use the money for real Arctic icebreakers,” Byers said. “We need three or four medium icebreakers to help continue the Coast Guard’s ability in the Arctic.”

Byers also said he’d like the Liberals to review another Conservative promise to build a deep water port for the Canadian Coast Guard and the Royal Canadian Navy in Nanisivik, a shuttered lead-zinc mine on Baffin Island in Nunavut.

“I think there is a real case to be made for actually locating that port at Iqaluit, the capital of Nunavut, where 8,000 people live, where the port could actually serve an important civilian function in addition to supporting the navy,” Byers said.