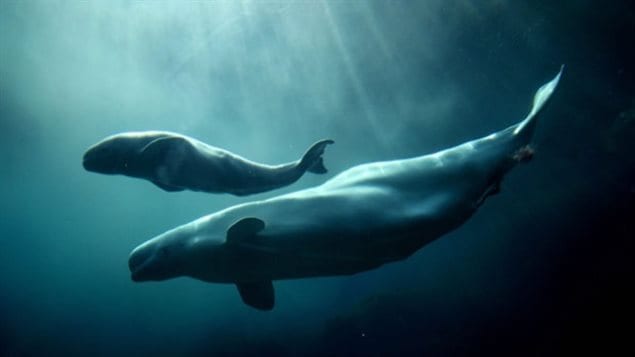 A beluga whale swims with her calf at the Vancouver Aquarium. The beluga population in the St Lawrence continues to decline even though hunting was banned in the 1970’s. Where once there were tens of thousands, the population now numbers fewer than 900.
Photo Credit: Darryl Dyck/Canadian Press)

For several years marine researchers have been concerned about high mortality of beluga whales in the St Lawrence.

That concern has risen again after analysis of the dead whales found last year.

Of the 14 carcasses found last year, three were pregnant females, and six were of newborn calves. One was identified as hermaphrodite.

Necropsies performed on the dead whales showed the adult females were either pregnant or had just given birth.  The babies found showed no signs of disease or trauma leading to the conclusion they had died of starvation or dehydration after being separated from their mothers.

Since 1983 all dead whales have had necropsies performed at the University of Montreal’s faculty of veterinary medicine in St-Hyacinthe.

Robert Michaud, who heads the Group for Research and Education on Marine Mammals (GREMM) at the school says the deaths are very worrisome. He says the beluga population is declining at the rate of one to 1.5 percent every year, even though the mammals have no predators.

He thinks there are a number of factors contributing to the decline. One is the ongoing presence of contaminants in the water. One such chemical is PBDE, a flame retardant once widely used in fabrics, for clothing, drapes, carpets, furniture etc.  In beluga it affects the thyroid gland, important to help in expulsion of the foetus during birth..

Other hormone mimicking chemicals are belieived to have contributed to the hermaphrodite beluga found dead in 2015. Hermaphrodism is normally very rare, says one researcher. Only six cases of marine mammals have been found, three of them were beluga from the Saint Lawrence.

Another problem is the reduction of herring prey fish in the region, especially in spring. This may make the females weaker when they need strength for birthing.

Global warming means less ice in the river. The beluga take refuge under the ice, and without it they are more exposed to wind, and buffeting from waves and storms.

Another aspect is noise. All whales communicate through sound and with increased shipping, and a longer season, the noise has both a psychological and physiological affect on the whales, especially during calving. Researcher Stephane Lair of the University says that farmers know to keep things quiet when cattle are birthing, in order to avoid stressing the animals.

Both Michaud and Lair evoke the possibility that the beluga are an indicator of the health of St Lawrence, and that they could disappear.  They say it wouldn’t necessarily affect the ecosystem, but would represent a huge human failure to recognize and deal with the issues.