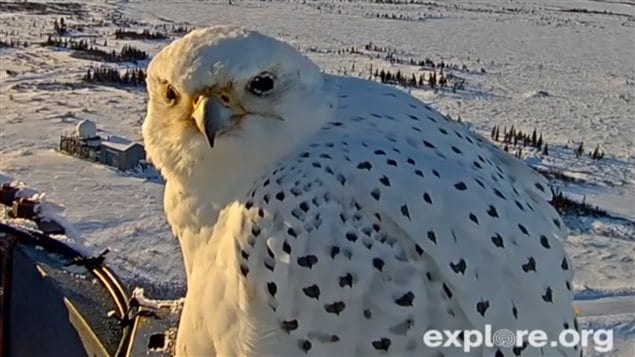 It almost looks like this white gyrfalcon is posing for the camera.
Photo Credit: explore.org

Thousands of people are going on line to look at a rare white gyrfalcon who has been gazing steadily into a camera in Churchill, in the province of Manitoba. The camera was set up to capture the northern lights, which sometimes radiate across the night sky. It does that, and in the daytime it provides close ups of the falcon.

The gyrfalcon is the world’s largest falcon and a daunting predator. It preys on large birds, often chasing and attacking them in flight. It normally roams the barren arctic tundra, mountains and coastlines year round.

“They’re not that common to begin with but they hang out here in the wintertime,” said Heidi den Haan of the Churchill Northern Studies Centre to the CBC. “It’s almost like a photo bomb,” she said, laughing.

Falcon believed to have come first

Den Haan thinks the falcon was likely there before the camera was installed. There are not many trees in the area and it may like the vantage point provided at the top of the tower.

The camera was installed through explore.org, a multimedia organization that documents nature around the world. It posted the video on Facebook.

This is by no means the first camera to have captured a bird. Video of a snowy owl posted online recently was hugely popular.

Snowy owl captured by a traffic camera in Montreal. (YouTube)

It prompted the creation of a funny send-up involving a puppet and the same background.

The curious Albie Tross caught on another traffic camera in Montreal. (YouTube)