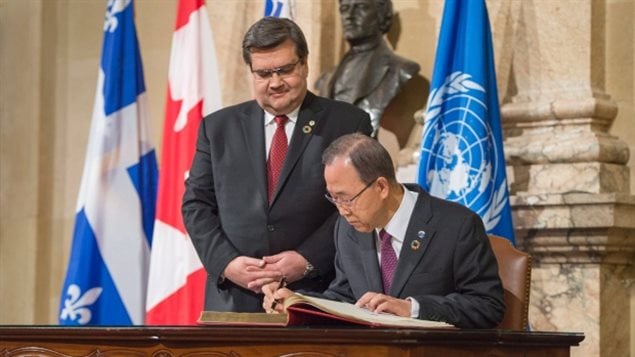 United Nations Secretary General Ban Ki-moon continued the second day of his visit to Canada in Montreal, a city he called an “enduring friend of the United Nations” on Friday.

The head of the United Nations has a busy schedule: earlier in the day, he met with Montreal Mayor Denis Coderre, then has meeting with Quebec Premier Philippe Couillard.

Ban is scheduled to give a speech at McGill University at 2:15 p.m. entitled, “Threats and Opportunities: The Power of Young People to Shape a New Future.”

He will meet with Couillard in the evening at the Ritz-Carlton Hotel.

Ban is also expected to meet with the staff of the International Civil Aviation Organization, the UN’s civil aviation body headquartered in Montreal.

The secretary general started his fifth visit to Canada with a meeting with Prime Minister Justin Trudeau in Ottawa on Thursday.

Following that meeting, Trudeau declared his intention to seek a seat on the UN’s Security Council when the next vacancies arise.

“We’re looking at a number of windows in the coming years,” Trudeau said. “We are going to evaluate the opportunities for Canada to mount a successful bid.”

Hervé Ladsous, the head of the UN peacekeeping operations, reportedly joined Ban on the trip to Ottawa and took part in a series of meetings with Canadian military officials.

Canada’s desire to play a larger role in UN peacekeeping operations comes at a very important time for the world body as it conducts high-risk operations in the Middle East and Africa.

Ban’s office issued a statement Friday condemning a coordinated attack against the camp of the United Nations Multidimensional Integrated Stabilization Mission in Mali (MINUSMA) that claimed the lives of at least five peacekeepers and injured approximately 30.

The statement underscored that attacks targeting UN peacekeepers constitute war crimes under international law and called for the perpetrators of this attack to be brought to justice.

“The Secretary General reiterates that attacks against MINUSMA will not weaken the determination of the United Nations to support the Malian Government, the parties to the peace agreement, and the people of Mali, in their efforts to achieve lasting peace and stability,” the statement said.