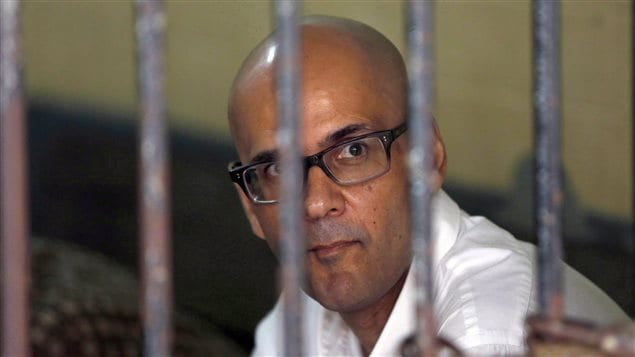 Canadian teacher Neil Bantleman is shown sitting inside a holding cell prior to the start of his trial hearing to listen to the prosecutor’s demand at South Jakarta District Court in Jakarta, Indonesia on March 12, 2015. Foreign Affairs Minister Stephane Dion said the Canadian government *is deeply dismayed and shocked* by an Indonesian Supreme Court decision to overturn the acquittal of Canadian schoolteacher Neil Bantleman.
Photo Credit: Dita Alangkara

An appellate court in August quashed the 10-year sentences given to Bantleman and Ferdinand Tjiong after they were convicted of sexually abusing kindergarten pupils at the Jakarta International School.

But a panel of Supreme Court judges reinstated the original verdicts and increased the jail terms to 11 years, said a spokesman for the high court.

“This decision is unjust, given the many grave irregularities throughout the various proceedings in this case and the fact that all evidence presented by the defence has systematically been rejected,” Dion says.

Despite Canada’s repeated calls for due process, this case was not handled in a fair and transparent manner, he says.

“The outcome of this case has serious implications for Indonesia’s reputation as a safe place for Canadians to work, travel and invest, as well as for Canada’s long history of cooperation with Indonesia,” Dion says.

“The international community continues to closely follow this case,” he said. “The outcome of the legal process will impact international views about the rule of law in Indonesia.”

Neil Bantleman and his wife, Tracy, also a teacher, had travelled to Indonesia together for job opportunities at Jakarta International School (JIS), an upscale private school where about 2,400 students are enrolled.

The US government is a founding partner of the school, renamed the Jakarta Intercultural School, which is attended by children of diplomats, expatriates and members of the Indonesian political and business elites.

Bantleman, 46, and Tjiong was accused of assaulting three kindergarten-aged boys between January 2013 and March 2014.

Their lawyers argued that the medical evidence presented by the children’s parents was fabricated and money was the motive.

A 125-million-dollar lawsuit filed by the parents against the school was thrown out by a Jakarta court last year.

Canada will continue to raise the case of Bantleman at the highest levels, Dion says.