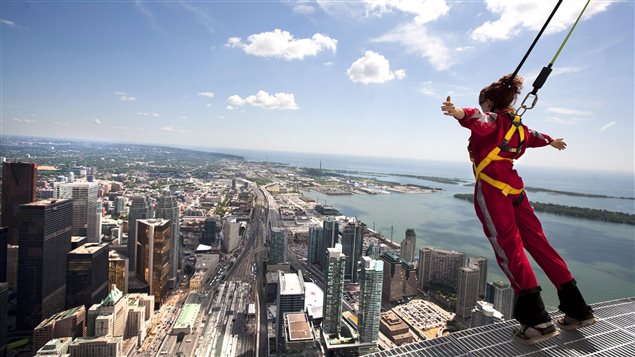 Tourism destinations for thrillseekers are becoming more popular. Toronto has a great one atop the landmark CN Tower. CP reporter Alexandra Posadzki leans over Toronto's downtown while participating in a media preview of EdgeWalk before it opened in August 2011.
Photo Credit: CP / Darren Calabrese

The tourism sector is moving into the spotlight, and there’s more to Canada than Niagara Falls, although it is still a powerfull draw. Greg Hermus is Associate Director of the Canadian Tourism Research Institute at the Conference Board of Canada. He is preparing a one-day conference in Vancouver on May 17th, 2016. It’s a first, and he says the timing is right.

“The tourism sector really has the potential to assume a more vital role in helping boost economic growth for the Canadian economy including regions that have been particularly hard hit by the fall in natural resource prices.” he says.

The low Canadian dollar coupled with low gas prices helped increase tourism in 2015. Overall growth was about 8 per cent, with much of it being the result of Americans coming north to visit. But Hermus says the same conditions helped to restrict domestic travel outside the country as Canadians travelled and visited with the borders. About 1 per cent was due to an increase in guests from overseas.

The Conference Board is acting in tandem with the Federal Tourism Strategy which has four pillars or goals. The first is to increase awareness of Canada as a premier tourism destination by marketing and branding Canada internationally.

Second is the effort to facilitate and ease access and movement for travellers while ensuring the safety and integrity of borders for Canadians, particularly when it comes to air transportation.

Third is product development and investment, such as the increased initiatives in culinary destinations and adventure tourism. And the fourth goal is to foster an adequate supply of skills and labour to enhance visitor experience through quality service and hospitality.

This last goal is becoming increasingly challenging as a shortage of qualified labour is an emerging issue for many tour operators. Travel guides and adventure guides are in short supply at a time when people are increasingly looking for more than just visiting the sight.

Cruising is a growing tourist sector and Canada offers some spectacular opportunities. According to Hermus more are in development, particularly off the east-coast. The port-city of Halifax, Nova Scotia, and the Atlantic province of Newfoundland are looking to expand their maritime offerings but both places have some powerful constraints seasonally due to weather.